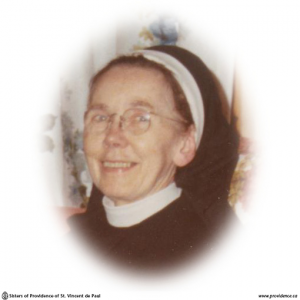 Anna Marie Laffan, daughter of Thomas Laffan and Mary Golden was born in the parish of Greensboro, Kingston diocese, on July 11, 1895. On August 15, 1914, at the age of nineteen she entered the Novitiate of the Sisters of Providence, but homesickness for her parents and seven brothers and sisters caused her to return to the parental home after 4 months before she had given a real test to her vocation.

She attended a business college and did clerical work for a few years. But always she regretted having left the Novitiate, and it was her constant desire to seek re-admittance. It was not, however, until 1922 that conditions in the family made it possible for her to return and on February 2 of that year she was again enrolled as a Postulant. On September 4, 1923 she made Profession taking the name of Sister Mary Vivian. In 1968, Sisters of Providence were given the choice of reverting to their family names, if they so desired, and Sister Mary Vivian became again Sister Anna Marie Laffan.

Sister completed her high school education at Maryvale Abbey, Glen Nevis and then graduated from Ottawa Teachers’ College. For forty years she taught in various schools of the archdioceses of Kingston and Pembroke, the longest term being at St. Michael’s,, Belleville (16 years) and St. Joseph’s, Arnprior (18 years)

In 1967 she retired from the classroom but kept active in helping at St. Vincent de Paul, Brockville for one year and St. John’s Convent, Perth for two years. In 1970 she suffered a cerebral accident and after a lengthy stay at St. Francis Hospital, Smiths Falls, she was brought to the Marian Infirmary. For two years she lingered, helpless but conscious. On May 7th, 1972 she was not so well and as usual, the doctor gave the diagnosis of bronchopneumonia, and it was known that she could not live much longer  She received the Sacrament of the Sick. Her only surviving sister, Mrs. Quinn of Toronto and a niece came to see her. She recognized them and was able to speak a little with them. The infirmary staff watched her closely and Sister Helen Killeen was with her when she breathed her last on May 14th at 4.30 a.m. the feast of the Ascension of Our Lord.

Her funeral was held on the 16th with Monsignor Hanley, V.G. the celebrant of the Mass. In his homily Monsignor said that it was appropriate that a religious sister should be called to heaven on the day we observe the feast of the Ascension. For a religious had undertaken to follow Christ in an intimate way and her life must bear a close remembrance to His. Like her master the sister fulfils her mission to manifest the Father’s name to those to whom she is sent; she endures the suffering – long or short – of illness, and she can accept death with his words: “I have finished the work you gave me to do.” She can look forward then to rising with Christ and sharing in the glory of His return to the Father.

It happened that there were many burials at St. Mary’s cemetery on the 16th and Sister’s remains were left in the chapel until 9 a.m. of the 17th when Our Mother General and eleven sisters accompanied them to their last resting place.

Sister Anna Marie was competent teacher and had considerable musical talent so that she was able to develop fine choirs from the pupils in her classes. She was a devout religious.