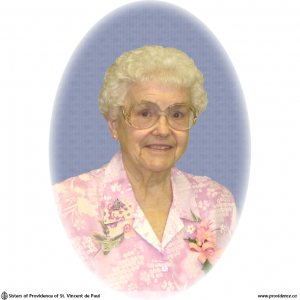 Anna Catherine Moran was born on June 19, 1916 in Maynooth, Ontario, the fifth child of nine children born to Frances Anne Golden and John Victor Moran. Her mother was a teacher and her father was a miner in Northern Ontario until the early 1920s when he and a partner acquired a feldspar mine just north of Maynooth. In 1926 it closed due to a recession. That year her paternal grandmother died and the family moved to her farm just south of Maynooth.

Anna entered the novitiate of the Sisters of Providence of St. Vincent de Paul on August 15, 1933. Following her First Profession in 1935, she went to Maryvale Abbey in Glen Nevis to complete her secondary school education. In 1938 she attended the Ottawa Normal School. Upon graduation she was assigned to teach grades 1 – 5 in Apple Hill as well as to be the church sacristan. In 1941 she went to St. John School in Gananoque where she was also sacristan and in charge of the altar servers. In 1945 she was assigned to St. Francis School in Smiths Falls to teach grades 7 and 8 and to train the altar servers. In 1947 she moved to Kingston to teach grades 5 and 6 at St. Mary Boys’ School. From here she returned to Gananoque as principal of St. John School and teacher of grades 8 – 10. She once again was responsible for the church sacristy and the altar boys. In 1956 she moved to St. Michael High School in Belleville to teach grade 11. In 1958 she became vice-principal of St. Patrick High School in Camrose, Alberta and teacher of grades 10 and 11. In 1964 she returned to Ontario as principal of St. Mary School in Trenton and teacher of grades 5 and 6. The following year, 1965, she was assigned to Providence College in Brantford. From 1967 to 1973 she taught at Nicholson Catholic College in Belleville.

During her 34 years of teaching Sister Anna’s other involvements included being a member of the salary negotiating team in Belleville for 4 years, a pastoral visitor at the Belleville General Hospital, President of the Teachers’ Federation for Camrose and District, President of the Camrose Ministerial Association, Secretary of OECTA Kingston and coordinator of the Catholic Charismatic Group in Belleville.

In 1973 Sister Anna joined the Movement for a Better World for a period of five years. During this time she trained and ministered in Buffalo, Washington, the New England States, Westport, Smiths Falls and the Calgary Diocese. In 1978 she became the Pastoral Associate of St. Francis Xavier Parish in Camrose, Alberta until 1987. She then enjoyed a sabbatical year at the Jesuit School of Theology in Berkley, California. In 1988 she returned to Brantford as Pastoral Associate at St. Pius X Parish. In 1994 she was named Coordinator of Marian I at Providence Motherhouse.

Sister Anna died peacefully at Providence Motherhouse on October 28, 2017. The Mass of Christian Burial held in the Motherhouse chapel on November 7, 2017 was presided over by Most Rev. Brendan M. O’Brien, Archbishop of Kingston. Reverend Leo Byrne was the homilist. Burial was at St. Mary’s Cemetery.