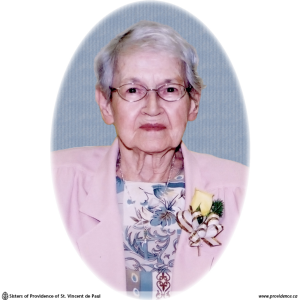 Rita Mary Haughian was born on June 19, 1914 in Stanleyville, Ontario to Francis Haughian and Mary Egan.

Her mother died when Rita was about 5 years of age. Since her father was not able to look after the 3 youngest children she went to live with her aunt, her father’s sister who was the grandmother of Sisters Nancy and Irene Wilson. Since she had a great love of children, Rita spent a lot of time at the Wilson’s home which was across the street from the grandparents’ home.

When she completed High School she took a business course, after which she worked at the Beamish Store in Perth. Later she was transferred to the head office in Ottawa.

Because she had a great interest in health care, Rita took some courses in home nursing.

She entered the novitiate of the Sisters of Providence February 2, 1951. After her First Profession in 1953, she went to Toronto to work in the office at Rosary Hall until 1957. During the next four years she did office work in Athabasca and St. Joseph’s Vocational School in Winnipeg. In 1961 she went to the Admitting Office at Providence Hospital, Moose Jaw. She then worked in the accounting offices of St. Vincent de Paul Hospital, Brockville for seven years and St. Joseph’s Vocational School, Winnipeg for two years.

She returned to Kingston and worked at the Diocesan Office in the Marriage Tribunal doing secretarial work for two years. She was then assigned to Brantford where she ministered in Home Care.

In 1980 Sister returned to the Motherhouse to work at the switchboard. Following this she spent a number of years visiting the sick Sisters in the infirmary until she was unable to continue this ministry.

Sister Anne Louise was always interested in current affairs and enjoyed good conversation. She looked forward to visitors even though her hearing had deteriorated.

She died peacefully in the infirmary on September 18, 2019. The Mass of Christian Burial, celebrated in the Chapel of Mary, Mother of Compassion, was held September 24, 2019. The celebrant and homilist was Friar Edward Debono, OFM Conv.