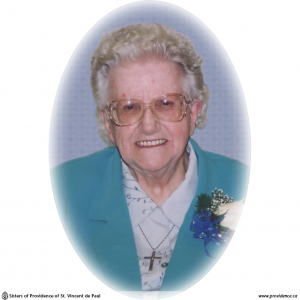 Mary Bernice Boyle was born on September 12, 1923 in Belleville, Ontario, the second youngest of ten children – 5 boys and 5 girls. She received her early education at Michael’s Academy and St. Michael’s High School in Belleville.

She entered the Novitiate of the Sisters of Providence in August 1941. Five months later her father died tragically as the result of an accident at his work. After 2 years of Novitiate, she completed her high school at Maryvale Abbey in Glen Nevis and then in 1945 she went to Toronto Teachers’ College.

As a primary teacher, she taught in Kingston, Gananoque, Montreal and Perth. Sister taught Grade One for most of her teaching years and prepared many children for the reception of the Sacraments of Reconciliation and Eucharist. While she was in Gananoque, Sister prepared a very successful playlet entitled “This is Our Mass Too” in which the children acted out and explained the actions of the Mass. Her brother built a child-size wooden replica of the main altar of St. John’s Church in Gananoque as well as wooden candles and candelabra. Sister Mary Joseph Andre made a set of red vestments and a set of Benediction vestments to fit a six year old boy. The playlet was first performed in Gananoque on the stage of the Lyceum and a home movie was made of the performance. Each new group of students that Sister Bernice taught presented the play and it was performed in several schools as well at the Motherhouse. Some of her former students recalled their involvement in the playlet and how the experience has given them an interest in Liturgy today.

She obtained Supervisor’s Certificates in School Music and in Primary Education and taught school music from Grades 1-6, children’s choirs and private recorder lessons. During her teaching career she entered many of her music classes and square dancing by Grade One pupils in the music festivals and claimed first prizes for them on numerous occasions.

While she was teaching in Perth, Sister Bernice suffered a bout of cancer and had to undergo a radical mastectomy. After a year and a half of recuperation, she returned to teaching part-time as a music teacher and prepared the children’s choir to sing at the Sunday Mass every other Sunday.

Through the years Sister taught religion on Sundays to children who attended public school. She also taught one or two week summer classes in small parishes where there were no separate schools.

One of her colleagues described Sister Bernice as a very dedicated and caring teacher, extremely interested in her students’ development and progress. All who knew her will recall her favourite expressions: “Sweet Mother, too-doo-dee-da, and Father of Lights”. Sister Bernice was seen as a very faith filled person who possessed and shared much joy and compassion, love and understanding.

Sister Bernice is predeceased by her parents Harry and Bridget (Burns), her sisters, Nell Dale, Margaret, Doris Henn, and Irene Stevens and her brothers, Thomas, John, Joseph, Harry and Frank.

She will be fondly remembered by her sister-in-law, Jean, her nieces, nephews, former students, and friends and by the members of her religious congregation.

The Mass of Christian Burial, held in the Chapel of Mary Mother of Compassion, Providence Motherhouse on September 27th, was presided over by Most Reverend Francis J. Spence, Archbishop Emeritus of Kingston, assisted by members of the clergy and Rev. Lloyd Cummings, homilist.