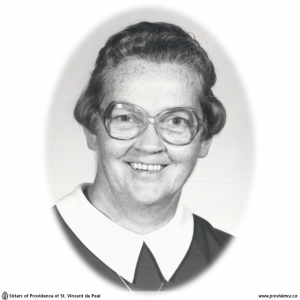 Carmel Josephine Killeen, the youngest of eight children, was born in Perth on March 27, 1922, to Alphonsus Killeen and Matilda Egan of Stanleyville.

Carmel received her primary education at St. Bridget’s School, Stanleyville, and completed three years of high school at St. Edward’s School, Westport, under the direction of the Congregation of Notre Dame. Carmel followed in the footsteps of her sisters, Margaret and Rita, and entered the Sisters of Providence on August 15, 1940, and made Profession on August 15, 1942, taking the name of Sister Mary Aloysia but reverted to her baptismal name, Carmel, with the publication of the December 1967 Decrees.

After Profession, Sister served at various times looking after the housekeeping and dietary needs of the Sisters in Glen Nevis, King and Perth. After a short period of caring for the boys at St. Mary’s Orphanage, Heathfield, she had two years experience caring for the elderly at Providence Manor.

Completing a course as a Registered Nursing Assistant, Sister cared for the sick at St. Anthony’s Home, Moose Jaw; Father Dowd Memorial Home, Montreal; and Providence Hospital, Daysland. Assigned to Rosary Hall, Edmonton as evening supervisor, Sister brought comfort to the women residents. Devising ways to provide comforts for her patients, she raised money by selling regal cards and stationery and by collecting pop bottles and cans. Sister will be remembered for her great devotion to her patients and her great sense of humour. Being a sports enthusiast, she attended Wayne Gretzky’s wedding!

Even though her health was less than adequate, her spirit of poverty and joy was an inspiration to many with whom she lived. Although a very private person, Sister did have some very close friends in the Congregation.

As she was very close in life to her sister, Sister Margaret Killeen, it seemed appropriate that Sister Carmel, who died on July 6, 1991, in the 51st year of her religious life, would share with Sister Margaret the funeral Mass that was concelebrated by Archbishop Francis J. Spence and several of the clergy on July 8.