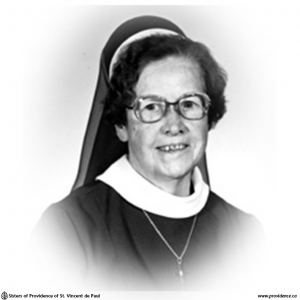 Catherine Mary Power was born on May 15, 1911 in Wine River, New Brunswick to Thomas A. Power and Marcella Flanagan. She was one of thirteen children. Her father was a farmer and worked in the lumber business during the winter months.

Catherine attended the Wine river Public School. Since Catherine was from a large family, she and her sister needed to find a job in order to help the family. As there was no work available in Wine River, they decided to go to Montreal where they found employment at the ammunition plant in Verdun. They lived with the Sisters of Service for a while then rented an apartment belonging to the Sisters. While in Montreal, Catherine took sewing lessons at the Singer Sewing Company and became an excellent seamstress.

After her profession, Sister Catherine went to St. Mary’s of the Lake Hospital where she cared for the sick for two years. In 1949 she was sent to King [City], Ontario to do the housekeeping and to look after the dietary needs of the Sisters for one year. Sister Catherine then went to Prescott to do the same work for two years. In 1952 she went to the House of Providence to care for the elderly. Three years later she went to Rosary Hall in Toronto where she was in charge of the girls’ rooms. After ten years at rosary Hall, Sister Catherine was assigned to the Father Dowd Home in Montreal where she looked after the Sisters’ dining room and cared for the sick. In 1970 she returned to Providence Manor where she was assigned as sacristan at St. Mary’s Cathedral and did part time pastoral care at Providence Manor for the next 18 years.

When Sister retired to Providence Motherhouse, she ministered to the Sisters in the infirmary by visiting them regularly as long as she was able.

Sister was a gentle and caring person who was always concerned about others. A realistic person with good common sense, she had the gift of being present to others in a special way. She never wanted to disturb or bother anyone even in her last illness, which she accepted with resignation. She was always appreciative of what others did for her. Her prayerfulness and great devotion to the Blessed Virgin were remarkable. Sister maintained a loving and close relationship with her family.

Sister Catherine is predeceased by her parents, Thomas and Marcella (Flanagan), her sisters, Jane Dunn, Elizabeth and Gertrude, her brothers, Patrick, Thomas, Martin, Vincent, Alexis, James and Joseph. She is survived by her sister, Nellie Dunn, of Redmondville N.B., and her brother, Stephen, of Sudbury, Ontario. She will be fondly remembered by her many relatives and by the members of her religious congregation.

The Mass of Christian Burial, held in the Chapel of Mary Mother of Compassion, Providence Motherhouse on February 13th was presided over by Most Reverend Francis J. Spence. Msgr. Thomas Raby, in his homily, remarked how her life and death had influenced many. Other members of the clergy were also in attendance.