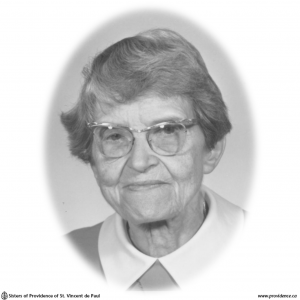 Catherine Rose Myers was born in Philipsville, Forfar, Ontario, on January 10, 1896, and was baptized on February 2. She was one of nine children born to Thomas M. Myers of Portland, Ont., and Rose Ann Healy of Toledo, Ont.

Catherine Rose Myers was educated in a country school near the farm homestead. Prior to entering the Novitiate of the Sisters of Providence in Kingston on November 16, 1927, she trained as a nurse at St. Francis General Hospital in Smiths Falls, Ontario, and obtained her R.N. in 1924; she had post graduate training in pediatrics and did private duty nursing in Smiths Falls and Port Huron, Michigan. Following her Profession on July 30, 1930, at which Catherine Rose took the name of Sister M. Julia, she was assigned to work at the House of Providence. Sister M. Julia reverted to her baptismal name after the decree of December 1967 was published.

Sister spent 41 years in the nursing field at St. Francis Hospital, Smiths Falls; House of Providence, Kingston; St. Mary’s of the Lake Hospital, Kingston; St. Anthony’s Home, Moose Jaw, Sask.; and St. Mary’s Hospital, Camrose, AB; and after her retirement in 1968, she helped Sister M. Alban in the Pharmacy for 13 years. Sister Catherine Rose was a fun loving, outgoing person and loved people. She knew where God wanted her to be and accepted any challenge that was presented to her. She was always quiet, pleasant, yet serious with a rare sense of humour and at times her face would break into a broad, open smile. She had a great wealth of knowledge and information which she used with great discretion. You could rest assured that her work was always well done. She earned the respect of physicians and patients alike.

Sister was never one to spare herself, yet not of robust health and with years creeping up on her, she gratefully accepted a lighter responsibility, that of becoming the official hostess for St. Mary’s, Camrose after many years of work in the nursing field. She greeted patients coming in for admission and introduced them to the unit and to the staff who would be looking after them. Sister also attended to the needs and comfort of the families visiting, especially if they were elderly or alone. She also found time to extend her gracious hospitality to all visitors to the hospital and to the Sisters’ visitors as well. Little wonder that she was greatly loved and appreciated. She was a great loss to all those lives she touched at St. Mary’s when she was assigned to the Motherhouse to take on other duties in the Infirmary.

Sister Catherine was a special person because of what she was – a role model – and had to put heart and soul into everything she did, whether it was playing cards, which she loved to do; fulfilling her assigned duties; or living out her religious commitment. All this was done in her quiet unassuming manner. It was in her “littleness” that she allowed glimpses of her true greatness.

Sister Catherine Rose preceded Sister M. Gerald Francis in death by one hour on the morning of June 15, 1991. Bishop F. J. Spence, assisted by several priests, presided at the impressive double funeral Mass in the Chapel of the Immaculate Conception, Heathfield. Sister’s niece, Lucy Myers, a Providence Associate, gave the first reading. Her sister, Julia, and many nieces and nephews were here for the wake and funeral.