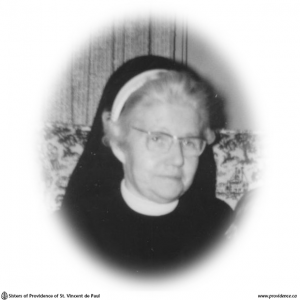 During the summer of 1917 the Reverend John S. Quinn, pastor of St. Carthagh’s Tweed, together with his parishioners, prepared the former Queen’s Hotel which they had purchased to be a convent home for the Sisters of Providence. One of the first tasks the Sisters took up after their September 8th arrival was the teaching of music. Piano lessons were given by Sister M. Hildegarde (Rushman) for 35 cents and a children’s choir was formed to learn the Requiem Mass for All Souls’ Day. One of the music students and a choir member in those early years was Catherine Jane Ryan.

Catherine was the first child of James Ryan and Mary Helen (Lena) Lynch. She was born at Westwood, Ontario, on October 13, 1903. A brother, Leo, and a sister, Helen, or Kathleen, as she was called, was a quieter child than the others and did not join much in their sports. However, her father bought her a beautiful piano and she learned to play it well. Through her music lessons, choir training and membership in the Children of Mary she came to know the Sisters and to admire their life and work.

By June, 1921, Catherine had successfully passed the “Middle School Examination for Entrance into the Normal Schools” and “University Junior Matriculation”, but she decided to place the future development of her talents in the hands of God. When she wrote to Mother M. Clement (O’Shea) to ask to be admitted to the Novitiate of the Sisters of Charity of the House of Providence at Kingston she was already well known to the Council. Sister M. Hildegarde had frequently spoken of her. So, before her 18th birthday she had begun her training as a postulant.

The first year was a busy one as Catherine was sent to Queen’s University to study. A Miss Boyd, or Prescott, who had purposed boarding at the Notre Dame Convent in Kingston, was on invitation, happy to change her plans and board at the House of Providence instead so as to accompany Sister Catherine to Queen’s for the year. Another young woman, a sister of Sister M. Macrina (Joyce) was hired at this time to supply teach for Sister M. Matthew (Kelly) and the plan was for the two girls to share the “double room over the office”, with Sister M. Gertrude (Murphy) looking after their meals.

The life agreed with Catherine for, in her letter requesting the Holy Habit, she says “I have never experienced such contentment as has been mine in the Novitiate.” Knowing what we now do, we can see an irony in her words, for she was to spend 27 more years of her religious life with Novices, as their Mistress.

Before being appointed Novice Mistress, however, Sister Mary Anicetus, as she was called after first profession, went to Ottawa Normal School and then taught in the elementary schools of Kingston for nine years. In the summers she completed five more courses at Queen’s.

The first period of Sister’s apostolate as Novice Mistress began in September, 1934, and extended until April, 1944. At that time, she seemed in need of a rest and a change.  Her Sub-Mistress for the previous year, Sister M. Andrew (McDonald) became Mistress and Sister M. Anicetus spent part of the next four years teaching in Kingston and part off-duty. She returned to the work of directing the Novitiate in September, 1948, and continued until September, 1966, so that she held this critical post in the Institute for a total of 27 years and 7 months. The Novices she trained in that period are now the major work force of the Congregation. The perseverance, holiness and apostolic fervour of these Sisters is her highest tribute today.

From a book of retreat resolutions which Sister Catherine kept, it is obvious that she strove to be a Christ-like model for her Novices. She repeats again and again for herself two instructions: First, that she must make good use of her period of daily meditation and by such practices as ejaculatory prayer, hourly elevation and purity of intention keep herself united to Christ throughout the day; second, that she must strive to be patient and to control her quick responses. The fact that these are repeated, even through what she calls “trials of faith”, indicates singleness of purpose, as well as recognition that improvement depends in perseverance and constant re-application of oneself to the task. She taught her Novices what she learned in her own struggles.

From teaching notes that Sister Catherine prepared for classes with the Novices, one can see that she read assiduously, keeping herself up-to-date. As she read she made notes on the important points, with page references for each one. Some of these refer to the “holistic spirituality” and “mission” orientation so much spoken about today. Often her notes were made on scrap paper stapled together, indicative of her desire to live frugally.  Her poetry collection is largely on the theme of belief in a future life -symbolic of the deep faith that energized her. She was a woman of great energy.

In the years between 1966 and 1973, Sister Catherine was a short while at Rosary Hall, Toronto, then St. Joseph’s Hospital, Edmonton, Providence Manor and the Dowd Home.  She held the office of Superior for four of those years.  By the time she returned to the Motherhouse in 1973, Sister was showing the first signs of failing memory.  By 1976, although in good health physically, she was bereft of her fine mental faculties and had to have infirmary supervision. Sister M. Thrasilla (MacDonell) and Sr. M. Electa (Murphy) corresponded with her family as she could no longer do so for herself.  Her special mission assignment in her final years was “to pray for the young Sisters”.

In March, 1982, Sister Catherine had a fall which resulted in a broken hip. She made a good recovery, but in December of 1984, she developed pneumonia. When her condition worsened by the 11th day of that month, she was taken to the Emergency Department of the Hotel Dieu Hospital where she died of congestive heart failure on arrival at about 4:20 p.m.

In her retreat notes of 1955, Sr. Catherine wrote, “With Thy grace, dear Lord, I have finally been able to make an offering of myself to Thee which You have been asking for so long.”  In 1956 she renewed before Him this act “of complete abandonment to Thy sweet will”. We have been the privileged witnesses of low completely she lived out that consecration.