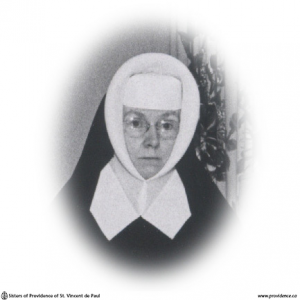 On September 16, 1905, Mary Christine Breeze was born at Forest Mills, Ontario. She was the daughter of David William Breeze, a miller, and his wife Mary Brennan. She had four brothers and two sisters.

Sister Christine did not enter the Sisters of Providence until the age of 30, but by then she had already trained as a nurse at St. Francis’ Hospital, Smiths Falls, and came to the community highly recommended as an “A-1 nurse of splendid character”. She took the name of Sister Mary Benedicta.

After making her final vows in 1941, Sister served in several hospitals and homes for the aged in both Eastern and Western Canada. She is particularly remembered for the fine care she gave the sick at St. Mary’s Hospital, Montreal, where her special concern for the poor made considerable impact. For a short time she served as superior at St. Vincent de Paul Hospital in Brockville, after which she was on the nursing staff of Providence Manor, Kingston and St. Mary’s of the Lake Hospital.

Health problems which began to plague Sister Christine in the early 1950’s contributed to a doubt rising in her mind about her vocation. In 1957 she asked for exclaustration, but her application was denied by the Sacred Congregation. She remained in Community, attempting to obtain relief through periods of release from duty, as suggested by Rome. However, by 1976 she found it necessary to ask for a leave of absence. It was granted and she took up residence in Belleville to be near her family.

Sister Christine kept up contact with the Community and several times during 1977-1978 prepared to return, only to be prevented from doing so by further illnesses. Finally, her efforts were rewarded and in March 1978, the Sisters of St. Mary’s of the Lake, welcomed Sister Christine back to community life.

However, God planned to take her soon into deeper union with Himself. Her current illness was diagnosed as being lung cancer. Then she developed double pneumonia and after two weeks in intensive care in Toronto General Hospital, quickly passed away. During her time in the hospital she was frequently visited by her local Superior, Sister M. Wilhelmina O’Hearn and the Superior General, Sister Muriel Gallagher, came more than once to console her. Other Sisters from St. Mary’s of the Lake spent time with Sister during her hospitalization.

The funeral Mass was concelebrated by Father K.P. Stitt, chaplain of St. Mary’s of the Lake Hospital, Monsignor J.G. Hanley, Father P.J. McAvoy, and Father D. Ryan. Also present were bishop J.P. Mahoney of Saskatoon, Father R.C. Pickett, Father D. Morris and Father D. Clement. Retreats were being given to the Sisters by bishop Mahoney and Father Morris, swelling the number of Sisters from other houses who were able to be present. Sister Christine’s sister, Mrs. Alice Lawlor, and her family, together with several other relatives, also attended. Father Stitt said the prayers at the grave in St. Mary’s Cemetery, Kingston.

As Monsignor Hanley said in his very beautiful homily, Sister Christine, like her patron saint, took to heart the gospel words, “unless a grain of wheat, falling into the ground dies, itself remains alone; but if it dies, it brings forth “. By her service and suffering, we feel she has surely secured her own salvation that of many others.