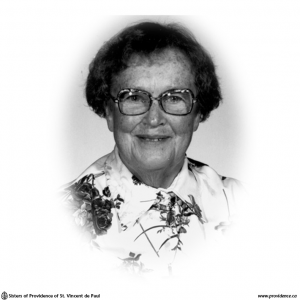 Mary Ann Kennelly was born on December 5, 1915 in Stratton, Ontario to Annie Frances (Daley) and Vincent Kennelly, the first of nine children. She spent her first eight years growing up on a farm in the Rainy River District. Her father worked in the lumber camps during the winter. Her family later moved to the Read and Napanee area. After Mary Ann finished high school, she worked in Ottawa and Washington DC until she decided to enter the convent.

On August 15, 1943 she entered the Novitiate of the Sisters of Providence of St. Vincent de Paul in Kingston, Ontario. After making profession, she studied nursing at St. Mary’s Hospital in Montreal. Upon graduation she took some courses in psychiatric nursing.

In 1951 her mother was killed in Montreal as she crossed the street from behind the bus on which she and Sister’s father were traveling with a group to St. Ann de Beaupre. This tragic event deeply affected Sister.

For many years Sister M. Delphine suffered from a mental disorder, which hospitalized her for several years. She spent the last three years of her life at Providence Manor in the Alzheimer’s Unit.

Sister M. Delphine was called home to her loving God at Providence Manor, Kingston, Ontario, on January 25, 2003. She is predeceased by her parents, Vincent and Annie Frances (Daley), her sisters, Patricia (Dolphin), Anne (Hogan) and Marguerite (Scharlock) and her brother, Edmund and is survived by her sisters, Frances (Lutz) and Madeleine (Walker) and by her brothers, Joseph and Vincent.

The Mass of Christian Burial, held in the Chapel of Mary Mother of Compassion, Providence Motherhouse on January 29th, was presided over by Msgr. Thomas Raby, and other members of the clergy. Father Gerald Byrne, a distant cousin, was the homilist.