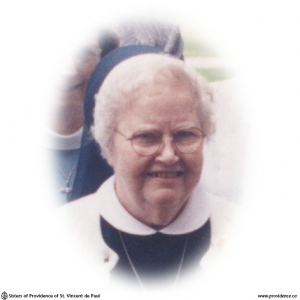 Always a woman of faith and prayer, one of Sister Dorothy’s last requests shortly before she died on August 30, 2000 was to be given her breviary. However, since her hands would no longer hold this precious book, she freely put it aside. This gesture was symbolic of the life of one accustomed to using life’s gifts in a spirit of gratitude, but who did not cling to them. The driving force behind this humble, simple Sister’s life was her keen desire to always accept God’s will for her.

Born on September 29, 1912 in Montreal, Quebec, one of twelve children to bless the home of James Gill and Mary Ann (Dewav), Dorothy Margaret Gill was the last surviving member of her immediate family. Most of her siblings died suddenly of heart failure. Dorothy’s parents raised their children in the knowledge and love of God. They attended Mass at St. Gabriel’s church and all the children were educated by the Sisters of the Holy Cross. Her mother, who was to die at the youthful age of 56, was the first person to respond to the needs of any neighbours who needed assistance. Her father worked hard as an inspector of tracks, trains and cargo for the railroad. He remarried in 1943 and died on a train traveling from New York in 1952. Dorothy became a strong efficient worker who for many years cooked, washed, ironed and performed many other household tasks involved in raising a large family. She somehow found time to do volunteer work at St. Mary’s Hospital and it was there that Sister Mary of Mercy recognized the goodness of this efficient, enthusiastic young woman. Dorothy wanted to be a Sister but feared her lack of formal education would be an impediment. Still, when encouraged to do so, at the mature age of thirty-one, Dorothy applied and was accepted into the congregation of the Sisters of Providence of St. Vincent de Paul, Kingston ON.

Upon pronouncing her vows in 1945, Dorothy took the name of Sister Mary Lois, the name she retained until reverting to her family name some years later. Sister Dorothy was a self-educated woman who taught herself to knit, crochet and sew. Her attractive doilies and other creative endeavours delighted many people. Her culinary and domestic expertise was given in service to her Sisters in Trenton, Brantford, Arnprior, King and Perth, as well as to developmentally handicapped women in McKinley Centre. While in Brantford, Sister Dorothy volunteered to baby sit for a nearby family. She was a real mother to these children and they kept in touch after Sister left that mission.

Eventually, because of illness, Sister had to retire to the Motherhouse Marian Wing. Here, she filled her time knitting warm articles of clothing to give to children in the northern missions, via Sister Una Byrne. Sister loved to read and to watch TV. She was a fan of the Toronto Blue Jays and Maple Leaf teams. She also loved to receive visitors and it must have been a heavy cross to lose her hearing. However, she kept herself occupied and made the best of a situation which could have been very distressful. Her cooperative attitude was appreciated by the nursing staff. Her love of God and her courage in accepting all that life held for her endeared her to everyone who knew her.

When Sisters visited Sister Dorothy in Kingston General Hospital she expressed her wish to go home but if that was not to be she wanted to die with courage. She accepted death as she had always accepted life as a gift from her God. On August 30, 2000, Sister Dorothy, whose lamp of faith was brightly lit to the end was called to her heavenly home by that Loving God.

Archbishop Francis Spence, accompanied by several priests, presided at the Mass of Christian Burial on September 2, 2000. In his homily, Rev. Monsignor T.J. Raby remarked that this faithful Sister was real “Martha” who for many years was busy in the kitchen serving others. Now, it is the Master’s delight to put on an apron, to welcome Dorothy, and to serve her a heavenly feast of rich food and choice wines with joy.