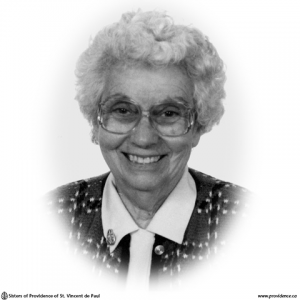 The late Sister Dorothy Hills was born on June 16, 1915 in Daysland, Alberta, the second child of Catherine (Anderson) and Albion Hills. She had two sisters, Alice who was four years older, and Eileen who was two years younger.

When Dorothy was only two her family moved to Edmonton. Following her graduation from Normal School in 1937, she entered the Novitiate of the Sisters of Providence of St. Vincent de Paul in Kingston. Two years later, she returned to Edmonton and taught in separate schools there for forty years. During these years she also helped out at Rosary Hall, a group home for women unable to live on their own. Her first teaching assignment was to take over Sister Verna Plue’s class at Little Flower School. The following year she was appointed to St. Anne’s. She often spoke of her experiences at St. Anne’s School. It was an old wooden two-room school down in the flats, four miles from Rosary Hall. The families in this area were very poor. For some time Dorothy taught grades one to six. Her classroom served as a chapel for Sunday Mass, which meant every Friday she and her pupils moved all the desks to the side walls, carried the benches to the basement and set up the portable altar. She also trained the altar boys. Their facilities were so limited that they had a real celebration when a telephone and wall clock was finally installed. As the school was on the city’s outskirts there was no city bus service. She and a companion, Sister Darina, took the greyhound bus to the depot and were obliged to walk the rest of the way.

During the summers Dorothy attended summer sessions at the University of Alberta where she received her Bachelor of Education degree. She went on to get her Masters of Education degree from the University of Eugene, Oregon. As well, because of her training and her generosity she somehow managed to conduct workshops and in-services for other teachers. In 1972 she attended a summer session at the University of London, England. Since the schools there did not close until the end of July she was able to visit many of them and study the educational system of England. In 1976 she was appointed as a reading facilitator for seven schools and twenty-five teachers. She researched new materials and methods, provided teaching assistance and conducted in-services.

Sister Dorothy was very talented in art, but unfortunately, she had little time to engage in this enterprise. When Dorothy retired, her fellow teachers, students and their parents realized what a loss they were experiencing. “She is special. She knows about all the children in the schools and their families. She is more like a parent than a teacher and principal, because she is so personally involved.” One parent was quoted as saying, “You can’t live in the past, Sister Dorothy said quietly but firmly. Sometimes a change is necessary.”

In 1978, Sister Dorothy was asked to become the director of St. Joseph’s Vocational School in Winnipeg, Manitoba. When this facility closed in 1979, the Government of Manitoba requested that the Sisters open a home for developmentally challenged boys. She was appointed director of this home. She decided that the home would not have a religious name because it might stigmatize the boys. If they were asked where they lived they would be able to simply say they lived at 129 Yale Avenue. By November of 1979, she and a companion, Sister Peggy Flanagan, welcomed into the home six boys, two from Portage La Prairie, three from the St. Amant Centre, and one from his family home. In general, the home was well received by the neighbours. In one case a neighbour was unreceptive until Sister Dorothy paid the family a visit and assured them they had nothing to fear.

Under Sister Dorothy’s able guidance, and the help of dedicated staff, especially John Lewis and Carmen Mercer, as well as several Mennonite volunteers, the home provided the boys’ spiritual, physical, intellectual and social needs, as well as encouraging independence in various life skills. The Sisters also gave society a chance to know and respect these special boys and to diminish the myths that often cause society to segregate them.

During the nine years that Sister Peggy lived in the group home with Sister Dorothy and the “Yale Boys”, she was always impressed by Dorothy’s practical common sense and by her compassionate and generous heart. Dorothy was her mentor and her dear friend. Regarding the ability of the residents to learn new skills, Sister Dorothy taught her staff not to wait until they saw it to believe it, but to believe it and then they would see it. Under her motherly care, and her wonderful sense of humour, the residents blossomed and blended into a warm, loving family.

In 1996, it was with a heavy heart that failing health necessitated Sister Dorothy’s retirement to Kingston, and arrangements made to turn the home over to the care of the St. Amant Centre staff. Nevertheless, as usual, she tried to make the best of things and remained a cheerful, grateful presence in the Motherhouse, telling everyone who visited her about the wonder staff that cared for her. Encroaching Alzheimer’s disease, cancer and a terrible fall meant that Dorothy required continual bed care. After operations were performed to set her broken bones, she was sent home form the hospital and lovingly cared for in the Motherhouse Infirmary, until God mercifully called her home on March 27, 2002.

Mass of Christian Burial, held in the Chapel of Mary Mother of Compassion, Providence Motherhouse on Tuesday, April 2, was presided over by Archbishop F. Spence. The homilist, Monsignor Don Clement, a long time friend, said what made Dorothy so special was that she never knew how special she was. She was indeed a wonderful Sister of Providence, who gave her all, and who suffered greatly in her last weeks of life. We now have another saint in heaven to whom we can turn for strength and courage in bearing our own daily responsibilities and sufferings.

Sister Dorothy’s grandniece, Kerri (Tercier) and her husband came to the funeral. Although other members of her extended family were unable to be physically present, they sent flowers and beautiful supportive messages. Her niece, Margaret, of Edmonton, had Dorothy’s school bell and she rang it a t the time of Dorothy’s funeral. This strong Providence woman, through whom we glimpsed the face of God, will be fondly remembered by her nieces and nephews, former pupils, her Yale House family, other friends, and by the members of her religious community.