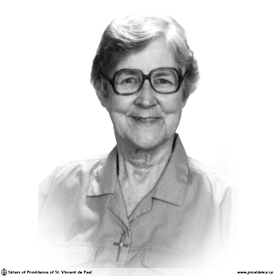 Sister Dorothy MacDonell was called home to her loving God on Wednesday, November 10, 2004.

Sister Dorothy was born in Greenfield, Ontario, a small town close to Alexandria, Ontario. She was the eldest of ten children, five girls and five boys, born to Mary Catherine and John James MacDonell.

She attended the separate school in Greenfield. Each day she and one of her sisters walked a mile each way to the school. In the spring they would stop at the family sugar bush to help their father gather the sap and watch him go through the process of making maple syrup. At the end of the syrup season her family would invite their neighbours to a taffy party at their home. As she was growing up, she enjoyed singing in the church choir and in the school concerts.

When Dorothy was thirteen years old, the family moved to Apple Hill. She attended the public school there and then went to boarding school in Glen Nevis for one year.

After leaving school Dorothy worked in the diet kitchen at Hotel Dieu Hospital in Cornwall. During the 1940’s she went to Montreal to work as a mother’s helper, looking after young children. Later she went to Brockville to take the Nurses’ Aide Course. After completing this course she took a course in obstetrics and pediatrics at the Grace Hospital in Ottawa. She then went to St. Francis’ Hospital in Smiths Falls.

Dorothy entered the Sisters of Providence in September 1951. After her profession of vows she was sent to Providence Manor to help care for the sick Sisters and a short time later she went to the Marian Infirmary at the Motherhouse. This was followed by two years at St. Francis Hospital, Smiths Falls and then she returned to the Motherhouse infirmary for another four years. In 1960 Sister Dorothy went to the Father Dowd Home in Montreal where she nursed on the wards until 1971. She then returned once again to the Marian Infirmary for another eight years. In 1979 she took a Home Care Course at St. Lawrence College, Kingston, and embarked on a new mission of helping with the girls at the Alfred Street residence in Kingston. It was in 1984 that Sister Dorothy went to Perth to do Pastoral Care Work. During this time she became the Spiritual Director for the Legion of Mary at St. John’s Parish. She joined the church choir and was a member of the Diocesan Choir for a few years.

Sister Dorothy has always been an unassuming, gentle and compassionate person who was close to her family.

She is survived by her sisters, Evelyn MacDonell, Eileen Hughes (Jack), Inez McRae (Kenneth) and Doreen and her brothers, John Francis, Charles, Angus, Donald and Jerome.

She will be fondly remembered by her brothers and sisters, her many nieces, nephews, friends and by the members of her religious congregation.

The Mass of Christian Burial, held in the Chapel of Mary Mother of Compassion, Providence Motherhouse on November 15th was presided over by Most Rev. Francis J. Spence, Archbishop Emeritus of Kingston, assisted by Rev. Msgr. Patrick Carty, homilist and several members of the clergy.