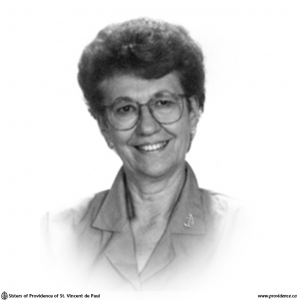 Dorothy Mary Frances was born in Stirling, Ontario on November 11, 1932, the first child of Kathleen and Joseph O’Neill who were both of Irish Canadian nationality and who faithfully embraced their Roman Catholic faith. Her brother Ronnie, who was to precede her into heaven, was born two years after Dorothy. Her father worked very had on the farm to provide for his family. Dorothy was very special to her mother, who was gentle, kind and affectionate. When her mother died suddenly of a stroke in 1969 Dorothy was devastated. Dorothy inherited the best qualities of both her parents. She always worked very hard. Achievement was important to her. She also had a warm, compassionate heart. Dorothy was taught by the sisters of Providence of St. Vincent de Paul, and was impressed by their dedication to what was good and by their service to others. Dorothy credited their example, as well as her parents’ religious values, for inspiriting her to enter religious life in 1951.

After graduating from Teachers’ College s a young professed Sister Dorothy, who took the name of Sister Mary Emerita for a time, began a career of teaching in Ontario separate schools. During the summers she studied to complete her university degree and specialized in French. She taught high school French in Belleville and in Brantford for over twenty years. After retiring from teaching she worked for a time as a parish assistant in Picton doing pastoral work with the mentally challenged. A highlight of Sister’s life occurred in 1977 when she experienced a thirty-day retreat. After this retreat she took a workshop of spiritual directors and subsequently directed retreats. She found this work very ‘special’ and rewarding. The awareness exercises and the use of a journal were her most helpful companions on her spiritual journey.

In 1982 Sister Dorothy became qualified as a pastoral care worker at Hotel Dieu Hospital in Kingston. Following this apostolate Sister Dorothy moved to Toronto where she taught English as a second language to adults from many troubled parts of the world. She was a loving presence to these people enabling them to enter the Canadian way of life.

After she was diagnosed with cancer, as long as she was well enough to do so, Sister participated in Wellsprings, a support centre for people and their families who were coping with cancer. On this difficult part of her journey she was supported by Father George Freemesser, CSB, and by other good friends, as well as by her relatives and Sister of Providence.

In the fall of 2001 it became necessary for Sister Dorothy to leave her apartment in Toronto, to entrust to the care of relatives her faithful feline companion, Katy, and to return to the Motherhouse in Kingston. Here, a circle of love was waiting to surround her. The cancer was relentless and soon she ended up in the Intensive Care Unit in Kingston General Hospital. Here, on October 19 with several loved ones at her side Sister Dorothy returned to her God. At her wake the following Sunday evening many relatives, friends and Sisters of Providence shared fond memories in which Sister Dorothy was described as being generous, non-judgmental, strong and gentle. She was a feminist in the best sense of the word. Some would even call her a ‘closet priest’ as she celebrated special home liturgies with friends around the table in her apartment. Although she was a quiet person, she lived life to the full and was a lot of fun to be with. Dorothy loved nature and was very intuitive. Although she was hard of hearing in one ear she was described as a good listener. A lover of solitude, Sister Dorothy nevertheless loved people and would often sit on her balcony to wave to the neighbors as they came and went.

On October 22, 2001 Mass of Christian Burial presided over by Most Reverend Archbishop Spence, was celebrated in the Motherhouse chapel. In his homily, Sister’s good friend Rev. George Freemesser CSB gave a beautiful homily in which he spoke of the privilege of being Sister’s friend and companion. During her struggles and fears, through faith she was brought to greater intimacy with her God. He referred to how the events of September 11 made us all feel fearful and vulnerable. Sister Dorothy felt these emotions when she was first suddenly diagnosed with cancer. Through it all Sister grew in her faith, which eventually banished fear. We can learn from her that God brings us to intimacy through our struggles and that fear flees in the face of God’s love.

Besides her parents, Sister Dorothy is predeceased by her brother, Ronald. She is survived by her sister-in-law Marie O’Neill (Toronto), by her nephews, Tom (Christine), Barry (Trish), Robbie (deceased) and Jeannie and their families. She will also be missed and fondly remembered by many other friends and by the members of her religious community.