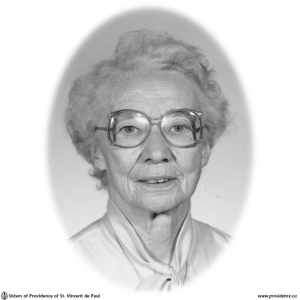 Born in Stoco, ON, on August 20, 1912, Elizabeth was the eldest child of the late Peter and Catherine (Taylor) Cassidy. She had three brothers, John Thomas, Joseph Leo and James Donald. Donald died in infancy and John died in 1992. Joseph is the only remaining member of Elizabeth’s immediate family.

Elizabeth received her elementary school education at S.S. No. 16 Hungerford and wrote her Entrance exams in Tweed. She began her secondary education as a boarder at Notre Dame Convent in Kingston and completed it after entering the Sisters of Providence. During her later teen years, Elizabeth remained at home to assist her mother.

Elizabeth who always wanted to be a nurse, made her contact with the Sisters of Providence through Sister M. Bibiana’s family visits to Stoco.

On August 15, 1933, Elizabeth entered the Sisters of Providence of St. Vincent de Paul.  In 1935, the now Sister Mary Hilarion was assigned to St. Francis Hospital in Smiths Falls. In 1937, Sister moved to St. Vincent de Paul Hospital in Brockville where she concomitantly completed her secondary school requirements and began her nurses’ training. In the fall of 1942, Sister successfully completed her R.N. exams. In 1947 she succeeded in her R.T. exams and began her ministry as a Registered X-Ray Technician. Many of Sister Elizabeth’s humourous tales about herself centered on her long years of experience in this field.

Sister Elizabeth’s fifty years of ministry in health care were varied: nurse, x-ray technician, administrator, purchasing agent, vice-chair of the board of governors and local superior of the convent. In these diverse capacities, Sister served for more than twenty-five years at St. Vincent de Paul Hospital in Brockville. She also served at St. Mary’s of the Lake in Kingston, at St. Francis General Hospital in Smiths falls, as well as at Providence Hospital in Moose Jaw.

In August 1978, Sister Elizabeth changed the focus of her health care ministry and directed her gifts towards the pastoral care of the sick. She moved to Picton in 1979, where for six years, she was both local superior and pastoral visitor to the hospital and nursing homes.

In September 1985, Sister Elizabeth was assigned to St. Michael’s Convent in Belleville, where for three years; she was local superior and continued her pastoral visits to the Belleville General Hospital and local nursing homes. Here, she was loved by all the sick and recognized by friends and parishioners as she daily whizzed her way through the streets between the hospital and convent. As well, she was mentor to novice pastoral volunteers who gave of their evenings to assist at the hospital.

From 1988 until moving to Kingston in 1990, Sister Elizabeth continued her pastoral visits from St. Joseph’s Convent in Belleville.

Shortly after her arrival in Kingston, Sister Elizabeth began her pastoral ministry at the Kingston General Hospital. In 1995 she received the Sr. Margaret Killeen award for her dedication to pastoral care.

During her seven and a hlf years at KGH, Sister Elizabeth became known as “an Angel of Mercy” who prayed simply and used holy water most generously. Her deep compassion and joyous humour endeared her to all. She had a passion for the care of the dying and left no stone unturned until they were prepared for their final journey. To the shock of her family, congregation, and all at KGH, Sister Elizabeth’s own final journey came suddenly on March 11, 1998, in the 65th year of her religious life.

Sister Elizabeth will be remembered fondly for her love of life, her deep prayerfulness, her joyous humour, and her culinary arts particularly her crab apple jelly and homemade bread; but, all will recall especially her compassionate care and concern for the sick and their families.

Sister Elizabeth loved her family, her church, her congregation, and her country, to all of whom she was ever faithful. As she served with compassion, trusted in Providence, and walked in hope, Sister Elizabeth enfleshed the motto of the Sisters of Providence of St. Vincent de Paul, “Cor caritati sacrum – A heart consecrated to charity.”