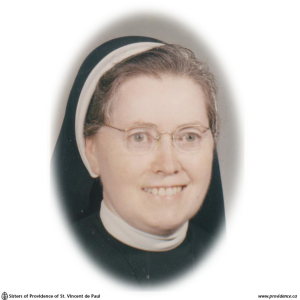 In recent years the Sisters of Providence of St. Vincent de Paul who have died have nearly all been more than 80 years of age. Many, indeed, have lived on into their 90’s. So, we will remember 1985 as the year when, one after the other, we lost four comparatively young Sisters to cancer. Sister Emily McDonald was the last of these to die, although she had been the first to be afflicted. The determined, organized opposition which she mounted against the advance of the disease for some twelve years was typical of her strong character. In those years Sister was often too sick to pray and she took solace in these words which she had copied from Victor Hugo and kept in her missalette:

“There are moments when, whatever be the attitude of the body, the soul is on its knees.”

While, in hope of relief, Sister tried one treatment after another, she always remained calm and at peace with god. These virtues of calmness, strength and order are evident in other family members and the combination of them with intellectual ability resulted in two successful farmers, two engineers, two teachers, one with a Master’s Degree in biology, one with a doctorate in science and one medical doctor among the siblings. One brother was a Rhodes Scholar at age twenty.

Sister Emily’s parents, Roderick John McDonald and Annie Sarah McDonell, who were of Scotch descent, were born and grew up in Glengarry County, Ontario, near the village of Glen Nevis. The land on which their farm was located was originally part of a land grant to United Empire Loyalists. The farm had exchanged ownership twice, but it had not been cleared or developed until Sister Emily’s paternal great grand-father bought the land and her grand-father helped to clear it.

During the gold Rush in Denver, Colorado, her father went there with the intention of earning sufficient money to return and erect a new house and other buildings on the family farm. He became a skilled carpenter and so was able to realize his ambition. It was to the house he built that he brought his bride, and it was there that Emily was born and grew to adulthood.

In all eleven children were born to Roderick and Annie, but the third and fourth, who were both boys, died in infancy. Emily Angela was the sixth child, coming next after Margaret, her only sister. She was baptized and confirmed in St. Margaret’s Church, Glen Nevis and went to S.S. # 16, Lancaster for her elementary schooling.

While taking her “Lower School” at Maryvale Abbey, Emily was very appreciative of the Sisters of Providence who taught her, but at the end of Grade XI she decided to take a one-year business course at Cornwall commercial College and enter the work-force. The letter she took with her from the college principal to introduce her to prospective employers described her as ambitious, dependable, courteous and trustworthy. It enabled her to find one good job after another in Montreal. For a while she was private secretary for a McGill professor.

From 1933-35 she completed her high school education, partly by private study and partly at Maryvale Abbey. The private study was accomplished at home while she helped her mother, her father having died in 1931.

While at Maryvale in October, 1934, she gave an address to encourage contribution for missionary work. The address concluded in this way:

“Let us not be selfish. We can, by our small money contributions, help to bring the light of Faith to those in distant countries – to far-off lands which we could scarcely ever hope to visit in person. Yes! A little self-denial on our part may lead more souls to God; and will it not be a comforting thought when one day we have to take the only road remaining to us – that to the doors of death – to realize that there may be, praying for us at the throne of God, some soul to whom we have pointed out the unerring way to a happy eternity? Now is the time for us to begin the work whose reward is so great”

Perhaps she was already thinking then of giving to the service of the Faith more than just money, in fact her very life, for only nine months later she wrote to Mother Mary Ursula (Byrne) requesting to enter the Sisters of Providence.

She came to the Motherhouse on September 14, 1935, with the best of recommendations. Her last employer in Montreal was a non-Catholic operating Barwick Ltd., Printing and Stationery. The company letter said they found her a “most conscientious and willing worker, being thoroughly reliable and most congenial around the office” and they “did not hesitate to recommend her to anyone requiring her services”. Her parish priest Monsignor Dan Macdonald, held her to be “a person of highest character and above every possible reproach”.  Her sister, Margaret, who had entered five years before, was able to put in a good word for her, too.

Emily had offered to go to Normal School before entering, if the Community “had no use for a stenographer”. She was advised by Mother M. Ursula that the Community preferred to send Sisters for such training after they made their first vows. Surely the Community had use for a good secretary, but perhaps because she had expressed an interest in teaching or because the need for teachers was greater, after her first vows Emily, now Sister M. Francis Clare, was sent to Ottawa Normal School.

After her teacher’s training was completed, Sister Emily went to Arnprior for one month – June, 1938 – as a supply teacher. Then in September, she received her first regular assignment which was to teach Grades 2 and 3 at St. John’s School, Kingston.

Over the following years, Sister Emily taught in Belleville at St. Michael’s Academy, St. Michael’s High School and Nicholson Catholic College, in Trenton at St. Peter’s, in Newmarket at St. John’s, in Kingston at St. Mary’s and St. Patrick’s, in glen Nevis at St. Margaret’s, in Brantford at Providence college and St. John’s College, and had a return assignment to St. John Chrysostom’s in Arnprior. She taught nearly all grades right to the end of high school and served as principal in Trenton, Newmarket, Glen Nevis and St. Patrick’s, Kingston.

Without a break in her teaching time, Sister Emily continually advanced her qualifications, completing a Bachelor of Arts Degree from Ottawa University in 1959, High School assistant’s Certificate in 1963, Interim Elementary School Principal’s Certificate in 1966, Accountancy Specialist and Data Processing in 1971 and Secretarial Specialist in 1972. The last three certificates capitalized on her early training and experience and from the 1950’s on she spent most of her teaching schedule in business subjects. As an extra-curricular activity she was often staff advisor to the Yearbook Committees.

Students saw Sister not only as a very competent teacher, but also as a person of wide interests. Politics, science, geography, current events, she had information on them all! In Community, too, the Sisters will recall that, if the table conversation lagged Sister Emily would have some interesting item to pick it up again. She believed:

“If you are interested only in your regular occupation, you are alive only to that extent. So far as other things are concerned – poetry and prose, music, pictures, sports, unselfish friendships, politics, international affairs – you are dead.

Contrariwise, it is true that every time you acquire a new interest – even more, a new accomplishment – you increase your power of life. No one who is deeply interested in a large variety of subjects can remain unhappy. The real pessimist is the person who has lost interest…If your thoughts are narrowly confined, you live a narrow life. To live intensely and richly you need to widen and intensify your relations.”

Thus, there was never any room in her heart, mind or conversation for uncharitable expressions.

Outside of a minor bout with tuberculosis in the 1940’s, Sister Emily had quite good health until 1973, when it was discovered that she had cancer. It was necessary for her to retire from her teaching position at Brantford in November and she came to the Motherhouse. From then until her death in 1985 she courageously tried one treatment after another. Some of these were still in the experimental stage. As she was accustomed to do in her private life and in her work, she kept accurate records, a case history of her experience. Everything that might prove valuable to those looking after her or to those caught in a similar trial, she carefully noted down.

As far as she was able, Sister continued working. She helped in the dining room and at the switchboard and did a variety of secretarial work. Her skills in that area were always in demand; in particular, she assisted the local Superior and helped Sister M. Electa, the General Secretary, to set up the first Community Heritage room. In 1977 she became secretary for the Kingston branch of the Right to Life Association, a vital volunteer role which she held until May, 1985.

In 1971 Sister Emily had become, through correspondence and prayer, a co-missionary to a French Canadian Oblate, Father Charles E. Gamache, who had been stationed in northern Canada since 1926. They exchanged long, friendly letters and she responded to his urging to pray for vocations to work in the north with the native people. When she became ill, she added her sufferings to her prayers.

Sister Emily was a special kind of correspondent. She kept in shorthand an account of important points from all the letters she received and made certain to refer to these points in her replies. This was one way in which she kept her shorthand shills alive. Another was to take down conferences and homilies as she listened. With her notes she could clarify memories for others.

In the last year or so of her illness, as the cancer progressed, Sister gradually became weaker and needed infirmary care. At this very difficult time, Sister Margaret, now living at the Motherhouse herself, was a constant support, gradually taking over more and more of the things that Sister Emily could no longer do for herself. In March, 1985, Sister Emily wrote to the other surviving members of her family explaining that, although it was her 50th Jubilee year, the only gift she wanted was prayers. Her letter says:

“On account of my limitations I have requested an exemption from (the) celebration…What I should appreciate is a continuing remembrance in your prayers. I believe that largely due to the prayers and Masses offered on my behalf I have received the many benefits that have helped me cope with my illness, including freedom from depression. I hope to have this sort of support continue. In view of inevitable death, I want to merit grace continually and increasingly; and I hope for the grace of a happy death in peace and dignity, with the use of my faculties so that I may make the final joyous offering of my life to God with trusting love and loving trust.”

Sister’s hopes were fulfilled when she gently passed away on November 21, 1985, at 11:20 a.m. Sister Margaret and Sister Nancy Wilson, Superior General, were with her in her infirmary room. Mass was being offered for her in the infirmary chapel. She quietly took her last breath at Communion time.

“She came to us and went from us with the highest recommendations. I never remember her doing anything wrong. She was like a great oak.”

Yes, Sister Emily McDonald did indeed display the fine characteristics attributed to her by those who recommended her to the Sisters of Providence of St. Vincent de Paul. Even in the heavy storms of suffering her virtue stood tall and strong among us. She lived every part of her life to the full.