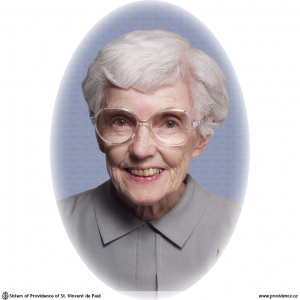 In the little village of St. Andrews East, Quebec, Eunice Sugars and her twin brother, Gerald, were born on July 28, 1924 to Maria Rayson and Allan Sugars. Since her father had to move to different towns and cities to seek employment during the depression of the 1930s, the family lived in Lachute, Quebec, Cornwall, Baie Comeau, Quebec and Montreal. She was first taught by the Montreal Sisters of Providence in St. Andrews East and later by the Holy Cross Sisters and the Sister of the Congregation of Notre Dame. In Montreal she took a stenographers course after which she was employed at the Canadian National Railways and worked in the Central Station for three years. It was at this time that she decided to enter religious life. On March 19, 1946 she, along with her second cousin, Sister Mary Gerald Francis and Sister Winnifred Callary, entered the postulancy.

Her first mission after her Profession of Vows was St. Mary’s of the Lake Hospital, Kingston to work in the wards. From 1948 until 1960 she worked between the House of Providence and St. Mary’s of the Lake Hospital. In 1963 she went to St. Vincent de Paul Hospital in Brockville where she spent twenty-six years as an electrocardiograph technician and as a Medical Records Technician for ten of those years. From 1989 – 1992 she took care of her mother until her death. In February 1992 she went to the Motherhouse to help in the Archives department and remained in this work until she retired In June 2010.

Sister Eunice was called home to her loving God on Friday, December 5, 2014. The Mass of Christian Burial, held in the Chapel of Mary, Mother of Compassion, Providence Motherhouse on December 13 was presided over by Friar Edward Debono. OFM Conv., who also delivered the homily.