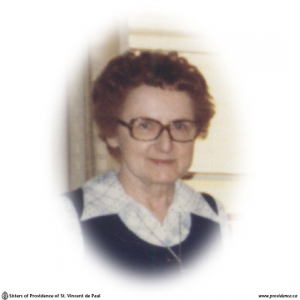 The whole Community of Sisters of Providence of St. Vincent de Paul suffered a shock on May 5, 1983, when word was received that Sisters Evelyn Noonan had died. But most distressful was the experience of the Sisters of St. Joseph’s Hospital, Edmonton, who found Sister Evelyn dead in her room.

Sister’s sister, Mrs. Eileen Maney, had come to Edmonton the previous day to visit her son. She spoke, to Sister by telephone and they arranged to spend the following day together when Sister would have her weekly “free day”.

It happened that on May 5th no morning Mass was offered in the hospital, and so no one was concerned when Sister Evelyn was not present at breakfast. The Sisters knew of her plan to visit her sister, and thought she was taking a little extra rest, allowable on a free day.

But when the Community assembled for noon lunch and discovered that the dishwasher had not been turned on after breakfast – a task Sister Evelyn always looked after — they became anxious. Sister Rose Anne Ryan and Sister Anna Kelly went to Sister’s room.  Sister Evelyn was lying on the floor before the window, an inhalator beside her.

Sister Evelyn, who had been quite healthy in her early life, had for fifteen to twenty years been afflicted with asthma. During the past year her condition had improved, no doubt because of the mild winter. But it appears that on the evening of her death she suffered an attack, went to the window for air and was using the inhalator, when God summoned her.  No one else heard the summons: no one heard her fall.

Margaret Evelyn Noonan, familiarly known as Marjorie, was born on January 16, 1914, in the parish of St. John the Baptist, Perth, Ontario, the sixth in a family of twelve – four daughters and eight sons. Two of the daughters died in infancy. Her parents, George Noonan, a school teacher, and Lorraine Watters, provided for their children a truly Chrstian home and a generous education.

They sent the two oldest boys to Regiopolis, Kingston, and the girls to Maryvale Abbey, Glen Nevis, in the hope that one or more religious vocations might be fostered. But as the family grew, they could not afford to send younger sons to boarding school and had to be content with Perth Collegiate.

Mr. and Mrs. Noonan considered themselves rewarded for their sacrifices when in 1930 Marjorie, at the age of sixteen years and seven months, decided to enter the novitiate of the Sisters of Providence at Kingston. The family by this time had moved to St. Vincent de Paul parish, Bathurst.

Marjorie made profession as Sister Mary Evelyn in 1932, and after completing High School at Maryvale Abbey and attending Ottawa Teachers’ College, entered on a teaching career that was to last for thirty-eight years. Twenty-three of these years she spent in Ontario – Arnprior, Gananoque, Smiths Falls, Belleville and St. Mary’s of Kingston. For the remaining fifteen years she taught at St. Malachy’s, Montreal.

During this time she attended Summer School at Queen’s University and in 1950 graduated with the degree of Bachelor of Arts. While in Montreal she availed herself of opportunities of enriching her intellectual and professional life by following courses in theology, Catholic philosophy and school law at St. Joseph’s Teachers’ College.

Although well qualified academically Sister found teaching difficult, for she was not a strong disciplinarian. And the fact that she remained at her post for so many years speaks well of her spirit of obedience and sacrifice.

When in 1974 she was relieved of classroom duties, she was assigned to institutes of social work and health care in Western Canada; as Superior at Rosary Hall, Edmonton, and then at St. Joseph’s Vocational School, Winnipeg; for a year at Providence Hospital, Moose Jaw, and for her last two years at St. Joseph’s Hospital, Edmonton.

Here she served as ward clerk on the sixth floor where, besides her main work of keeping records, she fulfilled many duties towards the patients so necessary in a rehabilitation hospital. She looked after their money, saw that they had small personal comforts, such as hair dressing and cigarettes, arranged for their transportation to doctors, dentists or other hospitals, and acted as hostess to their visitors. Both patients and nurses benefited from her loving concern and often confided in her. She always gave them encouragement and good advice.

At Mass for the repose of her soul was concelebrated in the hospital chapel by the chaplain, the pastor of nearby St. Anthony’s Church and three priests who are patients in the hospital. The body was then flown to Toronto where the funeral director met the plane and brought the remains to Heathfield Motherhouse. The funeral Mass on May 9th was celebrated by His Grace Archbishop F.J. Spence with con-celebrants Fathers Karl Clemens of St. Vincent de Paul, Bathurst, Leo Byrne of Railton, Dan Ryan, chaplain of Heathfield and Paul McAvoy of Amherstview. Father Clemens gave the homily.

Sister Evelyn, brought up in the midst of a number of brothers, had joined in many of their boyhood pranks and retained throughout her life a delight in playing practical jokes.  There was never a dull moment with her around! From her mother she inherited a sunny, kindly disposition, and from her father a love of reading, a phenomenal memory of what she read, a keen sense of humor, and a talent for story telling. To this, as a religious, she added prayerfulness and a concern for all people, rich and poor alike. These qualities made her a much-loved community person and no doubt, along with God’s grace, helped her to withstand the difficulties and frustrations of her teaching career.

During her later years involvement in the Charismatic Movement enriched her spiritual life. On the evening before her death, she and Sister Rose Anne Ryan had attended their weekly meeting in a neighbouring parish for commentary and reflection on the Psalms. Sister Evelyn had participated in the sharing and discussion which followed the presentation. Her joyful spirit while talking about God as a loving Father made people feel He really did care about them and their concerns.

Three weeks previous to her death she had made her annual six-day retreat. The director, an Oblate Father, administered the sacrament of the Sick to any of the retreatants who, because of age or chronic health condition, wished to receive it. Sister Evelyn received, for the first time in her life, this consoling sacrament.

As we pray for the repose of her soul, we thank God for the many blessings bestowed on Sister Evelyn Noonan during her sixty-nine years, and especially for the graces granted her in immediate preparation for death.