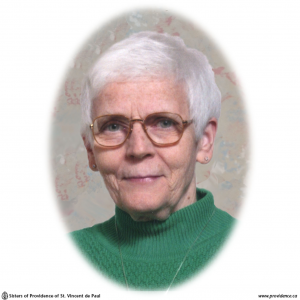 Mary Evelyn O’Grady was born in Montreal on May 2, 1931, the second child of Mary Margaret Meehan and Stephen Edward O’Grady. Along with her older sister and three younger brothers, she grew up in a very close and loving family. Her maternal grandparents as well as her Godparents, her father’s sister and her husband, played an important role in her childhood and teenage years. She spent many summers at her Godparents’ home and had the opportunity of working on their neighbour’s farm of which she had fond memories.

Evelyn was educated by the Sisters of the Congregation of Notre Dame until she graduated from St. Patrick’s Academy in 1949. During these years she had many invitations to enter their Community.

As a teenager she was active in all kinds of sports including organized hockey, basketball and baseball. She was an active member in Our Lady’s Sodality, the Legion of Mary and the Third Order of St. Francis.

After graduation she obtained a position at the head office of the Royal Bank of Canada as a junior accountant. She remained in this position until she entered the Novitiate on August 15, 1951.

After she made her First Profession on August 15, 1953 taking the name, Sister Mary Christopher, she was assigned to St. Mary’s Hospital in Montreal as Sacristan. In July 1954 she went to the orphanage at Heathfield to replace the Sisters who were on retreat or vacation. Then in August she was sent to St. Michael’s Convent in Belleville to take some high school courses she needed before training as a nurse. The following year she was assigned to the orphanage to look after the boys instead of St. Mary’s Hospital School of Nursing in Montreal.

After she made her Perpetual Profession on August 15, 1956 she was sent to St. Mary’s Hospital to train as a nurse along with Sister Marilyn Kearns and Ellen Murray. She graduated on May 14, 1959 and received the prize for bedside nursing. Her first assignment was to St. Vincent de Paul Hospital in Brockville as the Surgical Supervisor. A few months later she was given the position of Director of Nursing along with her present job.

In August 1961 she was appointed to Providence Hospital in Moose Jaw to set up an Emergency Department where she remained until 1967. In 1964 to 1965 she attended the University of Ottawa on a full bursary from the Government of Saskatchewan and received her B.Sc.N. She did her internship program at St. Vincent’s Hospital in Worchester, Massachusetts owned by the Sisters of Providence of Holyoke.

She returned to St. Mary’s Hospital in Montreal in 1967 as the Obstetrical Supervisor, a position she held until 1974 at which time she was asked to accept the position of Medical Supervisor. In 1989 she became the assistant Director of the Nursing Division of Surgery until her retirement from nursing in 1992.

It was during her sabbatical year beginning in July 1991 that she realized it was time to retire from nursing after 33 years as a nurse administrator. She spent five months of her sabbatical at Springbank Dominican Retreat Centre in Kingstree, South Carolina. After experiencing the physical and spiritual benefits of massage, she decided to take an intensive massage therapy course at the Centre for Growth in Wholeness in Berkeley, California. She received her certification from the Department of Education of California.

In September 1992 she was invited to become a member of the staff of Springbank Dominican Retreat Centre as a Massage Therapist for a year. During that year she had other duties including some building maintenance. Her skills in repairing things came in handy. Her father had taught her how to work with tools when she was very young and had given her an electric screw driver a few years before he died. In 1994 she began massage ministry in Montreal serving clients from referrals many of whom being referred through the Ignatian Centre of Spirituality. She remained in this ministry until 2006 when failing health prevented her from continuing. The Mass of Christian Burial, held in the Chapel of Mary Mother of Compassion, Providence Motherhouse on April 30th, was presided over by Most Rev. Brendan O’Brien, Archbishop of Kingston, accompanied by several members of the clergy. Rev. Msgr. Don Clement was the homilist.