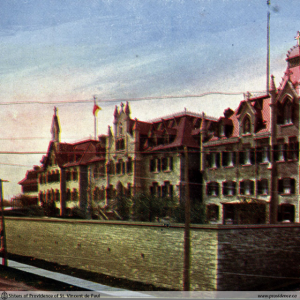 For the first time since the foundation of our Institute have we to chronicle the death of a Postulant, and the unexpected and sad event on April 26, 1889 closed forever an existence, dear to many hearts, in the person of Miss Flora McInnis, who entered the Novitiate Sep. 21 1888.

Born in England, June 30, 1863, she at an early age lost her devoted parents, but Providence inspired an uncle who was comfortably circumstanced to adapt his orphan niece. Through his influence and liberality her training and education entrusted to the Sisters of Charity in Belgium. Profiting by this singular advantage, she early completed her education and returned to Liverpool where she accepted a position as a teacher in the “Catholic Protection Society.” Fully imbued with the spirit of piety, added to gentleness and refinement of manners, she exercised a most salutary influence over her pupils.

The problem of life pressed sternly on her young heart: What does God demand of me? She ever regarded religious with much respect and affection and ardently desired to be associated with them. Being an expert in penmanship she was engaged as Secretary by the Society on a voyage to Canada in the spring of 1888, which afforded her the privilege of mingling closely with the Sisters of our Community and happily terminated in a petition for admission to the Novitiate. Gifted with a magnificent voice, sweet, powerful and well cultivated, she esteemed it a glorious privilege to use this rare talent in chanting the sacred melodies, She faithfully every regulation and lent a cheerful hand in soothing the sorrowing and distressed. But, alas! This precious life, so heroically dedicated to divine service, was doomed to an early termination, and it may be believed that this one great sacrifice brought that degree of sanctity God required before calling her to everlasting rest.

Our dear postulant, having contracted a slight head cold, that aggravated the severe headaches from which she frequently suffered, was placed under the care of our kind and experienced infirmarian, Sister Mary of the Cross, meanwhile, the most sanguine hopes were entertained that a few days’ rest and nursing would restore her to perfect health. Surely, God’s ways are not our ways! In less than a week, one night during prayer, a sudden attack of violent pain prostrated her. The infirmarian becoming alarmed, hastily summoned the Superior but before she arrival of the confessor of physician the soul of the sweet child was with God. Although her death was sudden it was not unprovided, but precious in the sight of God. Can we doubt that our Blessed Lady and St. Joseph bore her pure spirit to the throne of the eternal to join her melodious voice to the Heavenly Hosts who incessantly sing “Gloria in excelsis Deo”.