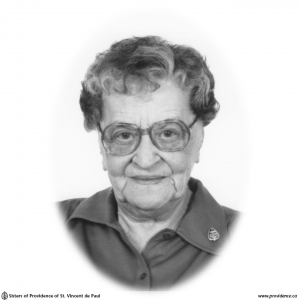 Born on a farm in Hastings County on April 30, 1912, Margaret Florence Goulah was the oldest of thirteen children born to the late Mr. and Mrs. John Goulah. They were a poor but happy family. Times were tough, but John and Margaret Goulah always found a way to keep their children well dressed and well fed. The family made their own butter and baked their own bread. “They never went to bed hungry,” Mrs. Goulah remarked, when interviewed, shortly before she died. Florence was baptized by Rev. J.S. Quinn in St. Carthagh’s Church, Tweed on May 5, 1912. Florence attended St. Carthagh’s School, where she came to know the Sisters of Providence. Sister Mary Philip prepared Florence for her First Communion. As a child, Florence was a member of The Children of Mary, and throughout her life she nourished a deep devotion to “Our Blessed Lady.”

On February 2, 1929, at the young age of sixteen, Florence decided to enter the congregation. Her aunt, Sister Mary Petronilla, was already a member of the community, having entered in 1913. Florence did not know her brothers and sisters well because they were very young when she left home. Four were not born until after she entered religious life. After five years, she met some of them for the first time in her parish church  Florence’s parents were glad to have a vocation in the family but, as she was very young, thought she would not stay. They watched the train many times to see if their first born would come back home. There were two other women who entered with Florence, Sister Mary Leon and Sister Mary Fergus.

After her profession of vows in 1931, Florence worked as a housekeeper in Apple Hill, Prescott, Gananoque, and Chesterville. Florence was among the first group of Sisters who made final vows at Heathfield in 1934, when it was fresh and new. Later, Sister Florence was sent to Winnipeg and then to Edmonton to help look after needy children. When she returned to Ontario in 1940, she took a course in practical nursing in Smith Falls. Florence liked nursing the sick and elderly in many of our Healthcare facilities over the years. In Athabasca, Florence was among a small group of Sisters who took over the hospital there. First, they worked very hard to clean the building. They began with two men and women. There was no night staff so Florence stayed up part of the night after working all day.

Florence worked at Providence Manor for ten years, changing beds and helping to give tub baths to the residents.

From 1978-1981 Florence lived in a group home for young women at Alfred Street. In 1981, she took a course in palliative care and spent nine years in Smith Falls ministering to the patients in two hospitals there. Over the years, Florence always made sure to visit her elderly mother as often as she could, especially after she moved into a nursing home.

When she retired to the Motherhouse, Sister Florence became the chapel sacristan. She visited the sick Sisters in the infirmary and would often be seen in her spare time knitting scarves for the St. Vincent de Paul Society.

life at Providence Motherhouse, Kingston, Ontario on September 2, 1998 in the 69th year of her religious life. Her cousin, Marian Goulah, and three Sisters of Providence, were with Sister when she died. One of them remarked on the aura of peace which settled in the room when Sister died.

Most Rev. Archbishop F.J. Spence, assisted by Rev. J. Rozon, Rev. C. Gazeley and Rev. D. Pope, presided at the Mass of Christian Burial in the Chapel of Mary, Mother of Compassion, Providence Motherhouse on September 5, 1998. The homily was preached by Rev. David Pope from Morrisburg. Father Pope knew Sister Florence some years ago in Smith Falls.  He anointed her in the hospital and remarked on her life as one which reflected God’s love to others. She was, he said, ‘a living prayer’. At Sister’s wake the evening before, many of her Sisters in religion and her sister Valerie, shared memories of Sister Florence’s gentleness, generosity, compassion and prayerfulness. She was never heard to say an unkind work about anyone. Attending Sister’s funeral were her sisters, Valerie, Betty, and Theresa. Her niece, Debbie Pender along with Debbie’s husband and children were also in attendance, and served as reader of the Word, or as Pall Bearers. Her other surviving brothers and sisters were unable to be present because they lived at a distance and were not in good health. Florence was pre-deceased by her parents, by her brother, Joseph, and sister, Vivian.  She is survived by her brothers, Donald, Ted and Leo and by her sisters, Marie, Rita, Vieve, Betty, Valerie, Theresa and Audrey. Sister will remain in the hearts and memories of all who were privileged to know her for a very long time.