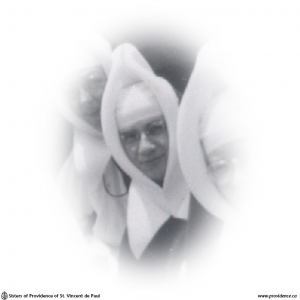 Frances Pender was born in Prescott, Ontario, on June 5, 1924 and baptized two weeks later in St. Mark’s Church. Her parents, Elias Pender and Mary Noune, were born in Damascus, Syria; their six children, three boys and three girls were Canadian-born, grew up and were educated in Prescott. A letter from Father M.E. James, one of the pastors of St. Mark’s, states that the family was an exemplary one, among the very best in the parish.

In 1944 at the age of nineteen she entered the Novitiate at Heathfield and made profession in 1946 as Sister Mary Anthony; when in 1968 the community decided that in future new names would no longer be given at profession, and that those sisters who had already chosen a religious name might revert to their family name, Sister Mary Anthony became known again as Sister Frances Pender.

For a few short years she worked in the offices of hospitals – three in St. Mary’s of the Lake, Kingston, one in Brockville and two in Smiths Falls. Then she was stricken with a mental break, and the remaining twenty years of her life were a period of almost continuous suffering. In 1954 she was admitted to Kingston Psychiatric Hospital and, while she was always brought home to the Mother House whenever the doctors would give permission, she was never able to remain more than a few months at a time. Everything that science could suggest was done for her. Doctors and nurses were very kind to her. Twice surgical operations were performed – in 1965 and again in 1972 – in the hope that she would get some relief from her anguish. But no lasting benefit resulted.

She had been home for a time the last months of 1973, but on January 22 had to return to the hospital. On February 22 she was permitted to come home for the week-end and on Friday and Saturday seemed to be in good spirits. On Sunday, February 24 the Sisters did not meet for breakfast as our Sunday Mass is late and there is no set hour for rising; consequently, no one missed Sister Frances until noon. When she did not come to the dining room for dinner Sister Margaret Rose went to her room and found her in bed looking as if in a quiet sleep, but dead. She had her rosary in her hand and her clothes laid out ready for dressing in the morning. Father Buckley, chaplain, anointed her immediately.

The funeral Mass on February 27th was concelebrated by His Grace, Archbishop Wilhelm, and Father Don Clement, with Father Buckley and Monsignor Walsh of St. Joseph’s present. Everything about the Mass expressed joy. Her family had sent four beautiful floral arrangements (one a large cross of white mums and red roses) and these were placed in front of the railing facing the casket; with the white vestments and the joyful theme of the funeral ritual they symbolized our hope that sister Frances was being rewarded for her life of suffering by the beautiful vision of her eternal home. Father Clement, a friend of the family, with Father Buckley, recited the prayers at the grave.

Two sisters are the only survivors of the immediate family – Alice Pender and Gloria (Mrs. Campbell); they along with Mrs. Doris Pender – a sister-in-law, Mr. Campbell, two nephews and their families and a number of cousins from Ottawa attended the funeral.

Father James Davis, C.Ss.R., who had been our ordinary confessor for some years and had been very kind to Sister, on learning of her death wrote as follows:

“She was always a good religious, even in the psychiatric hospital. I am inclined to place her in the memento of my daily Mass, but do think that we should pray to her rather than for her. She had her purification on earth.”