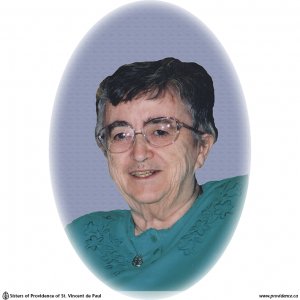 Frances Piasecki was born in Hamilton, Ontario on March 30, 1926, the eldest of six children. When Frances was very young her family went to Winnipeg in search of work. But when that failed they returned to Hamilton. Frances began working in a cotton mill when she was 14 years old to help supplement the family income. That lasted three years. When she was 20 she began working at the telegraph. She later went to Toronto where she worked as a teletype operator for the C.P.R. and lived at Rosary Hall. It was there that she met the Sisters of Providence of St. Vincent de Paul. But before she would enter the Novitiate on September 15, 1955, she felt called to ensure that her siblings were settled in life.

After making her First Profession in 1958, she was assigned to the orphanage at Heathfield. In 1964 she went to St. Joseph’s Vocational School in Winnipeg to work with the boys. She took the St. John Ambulance course and in 1969 she completed the RNA course at St. Vincent de Paul Hospital, Brockville. In 1970 she went to the Congregation’s mission in Momostenango, Guatemala, to assist in the dispensary and with the cooking for the Sisters. She also conducted sewing and cooking classes for the women. Six years later she returned to the Motherhouse when she required medical attention for a spur on her heel. The next year she was assigned to McKinley Centre to work with the mentally challenged women. After nine years there, Sister Frances was ready for a sabbatical year which she had at the Galilee Institute for Personal and Spiritual Growth in Arnprior.

She returned to the Motherhouse the following year where she assisted in the laundry room and looked after a stamp collection that generated funds for the Saint Vincent de Paul Society in Kingston. Beginning in 1987 Sister Frances experienced failing health. After a life spent in ministering with love and compassion to the marginalized, Sister Frances was called home to her loving God on June 4, 2008.

The Mass of Christian Burial, held in the Chapel of Mary Mother of Compassion, Providence Motherhouse on June 10 was presided over by Most Rev. Brendon M. O’Brien, Archbishop of Kingston, assisted by members of the clergy. Rev. Msgr. Don Clement was the homilist.