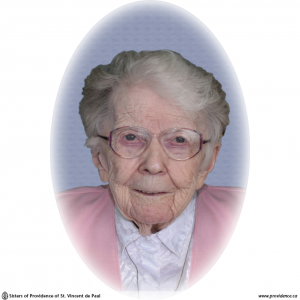 Mary Gertrude Casey was born in Tweed, Ontario on October 6, 1914, the youngest of five children of Mary Murphy and Peter Casey. She attended St. Carthagh’s Separate School and even though she wanted to attend high school for some reason she said that she didn’t. She stayed home and helped with the farm work as well as the housework. Then she was offered a job working for the Wilfred LaSage family which lasted several years. Then on March 19, 1944 she entered the novitiate of the Sisters of Providence of St. Vincent de Paul as she said ‘to give it a try’.

Following her First Profession, her ministries of caring for the elderly and sacristan took her to Providence Manor and St. Mary’s of the Lake Hospital in Kingston and the Father Dowd Home in Montreal. In 1968 she went to St. Peter’s Convent in Trenton where she served as sacristan of the convent chapel and took guitar lessons and eventually gave guitar lessons at the local music store and at the convent. Ten years later she moved to the Motherhouse where she taught guitar lessons, assisted at the switchboard and took over the Altar Bread Department distributing altar breads to the parishes. Throughout the years, Sister Gertrude enjoyed strumming her guitar and playing the piano by ear at various community celebrations. She also was gifted at writing poetry about people and events in the community and provided much entertainment for the Sisters through her gifts.

In 2014 she celebrated both her 70th Jubilee and her 100th birthday. Although very frail she rose to both of these occasions with joy.

Sister Gertrude was called home peacefully to her loving God the evening of Monday, November, 3, 2014 at Providence Motherhouse. The Mass of Christian Burial, held in the Chapel of Mary, Mother of Compassion, Providence Motherhouse on November 7 was presided over by Most Reverend Brendan O’Brien, Archbishop of Kingston, accompanied by members of the clergy. Reverend Timothy Shea, a close friend, was the homilist. Her nieces and several other relatives and friends were also in attendance.