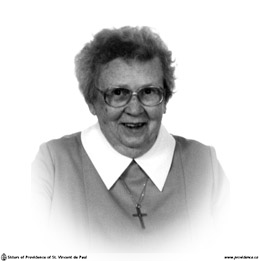 Sister Gertrude went home to her loving God peacefully on February 8, 2005. Sarah Gertrude McGinn was born at Fairview Farm on the 4th Concession of Matilda Township, Dixon’s Corners, Dundas County on Oct. 7, 1913, the eighth child of James McGinn and Alice (Gibbons). Six weeks later she was baptized in St. Ann’s Church, Dixon’s Corners. Gertrude was not long to enjoy the loving care of her father for in January of 1914, Jim McGinn died of pneumonia. He had made such a deep impression on her that she demanded for six weeks to be taken to look in his bed. Then she too, contracted pneumonia which was to be a recurring illness for many years.

With the help of Gertrude’s four brothers, but especially the eldest, John, her mother struggled to maintain the family farm. During her early childhood growing up on the farm, and while her older siblings were all in school, her companions became the cats and dogs which she dearly loved.

After six years in the local public school, Gertrude insisted on following her sisters’ footsteps to Maryvale Abbey at Glen Nevis, where she grew to love plaid and Scottish music. Her love of reading had been initiated by the gift of her first library card from her sister, Dorothy, when she was eight years of age. Sadly, it was Sister Mary Jerome’s hawk eye that prevented her from reading all the books in the little library at the Glen.

When she was either eight or nine years of age, her father’s two cousins, Sister Mary Michael and Sister Mary Alexander visited her home. It was then that she decided to enter the convent. When she was sixteen, she plagued her mother until she went to the parish priest, Rev. James Ryan, who said, “The mark is there, you’ll have to let her go.” Only her immediate family knew, for Gertrude realized that there would be too much opposition to a 16 year old burying herself in the convent.

During her retirement, Sister ministered at the McKinley Centre, worked at the switchboard, was Oratory sacristan and visited the Day Care at Providence Manor.

Sister Gertrude, whose life of faith in the midst of deep suffering, whose keen mind and loving outreach to her students, to the residents of Providence Manor and to the prisoners whom she supported by her prayers and friendship, were an inspiration to all.

Sister Gertrude, who is predeceased by her father, James, her mother, Alice (Gibbons), her brothers, John, Wilfred, Henry and Patrick, her sisters, Kathleen McGinn and Dorothy King, will be dearly missed by her many nieces and nephews. She will be fondly remembered by her many relative and friends, as well as by the members of her religious congregation.

The Mass of Christian Burial, held in the Chapel of Mary Mother of Compassion, Providence Motherhouse, on Friday, February 11, was presided over by Archbishop Emeritus Francis J. Spence, accompanied by many other members of the clergy. Rev. Gerald Byrne, homilist, reflected on how Sister Gertrude, even in her suffering, encouraged the nurses and staff and established a friendship with the man who delivered her oxygen and the prisoners who wheeled her in her wheelchair from the chapel on Sundays.