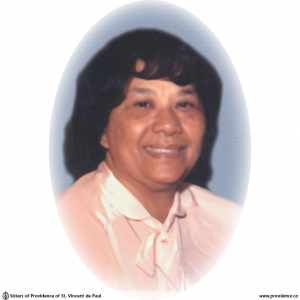 Sister Giovanni was born in Kingston, Jamaica on September 1, 1929 to Colin and Inez Burrowes. She came to Canada where she trained as a nurse at St. Mary’s Hospital in Montreal graduating in May 1953. She nursed on staff until she entered the novitiate of the Sisters of Providence of St. Vincent de Paul on February 2, 1954. Following her first Profession of Vows at which time she took the name Sister Giovanni, she went to St. Vincent de Paul Hospital in Brockville as supervisor of the evening and night shifts until 1959. She then returned to St. Mary’s Hospital, Montreal. During this time she worked as Supervisor of the Out Patients Clinics for one year and then as Hospital Supervisor of the evening shifts until 1968.

She was then assigned to St. Mary’s Hospital in Camrose, Alberta until 1975 as Director of Nursing. Following a 30 day retreat in Spokane, Washington, she went to Holy Family Hospital, a Rehabilitation and Geriatric Care facility in Vancouver. Initially she was Director of Nursing and later became Director of Patient Care Services. She also held the position of Hospital Administrator for 6 months until a replacement administrator was hired. When she resigned from her administrative positions in 1991, she became involved in Mission Integration for Catholic Health Care.

Sister Giovanni had a vision of what good individualized care should be for the older patient. She was fair, progressive and supportive of change and encouraged staff to be innovative and discerning. She was always concerned with the welfare of all staff and helped them to work as a team.

Sister Giovanni died peacefully on April 29, 2012 in the hospital in Langley, BC.