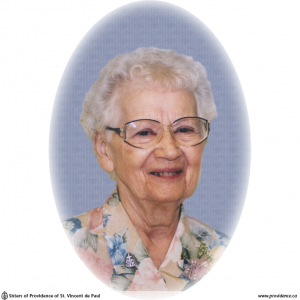 Mary Theresa Grace Garvey was born on July 19, 1916 in Mayo, Quebec, the third eldest of twelve children. Grace grew up on the family farm in a warm family devoted to one another and to the Church. Her parents, Thomas Patrick and Rose (Killeen) Garvey were called by the children, Papa and Mamma. Life in rural Quebec in the first quarter of the century provided simple pleasures for adventuresome children. Grace and her siblings enjoyed fishing, horseback riding, berry picking, music and singing. Each night before bed they gathered to recite the rosary led by her mother. Her memories of her parents filled her with wonder at their skill in dealing with a sometime rowdy, noisy household which they supervised with wisdom and grace holding chaos at arms length. She came to feel deep gratitude for the greatest legacy her parents could leave her and her siblings, that of their strong faith.

She attended the North Valley School in Buckingham, Quebec and was a member of the choir at St. Malachy’s Parish Church, a much loved activity for her. Despite her apparently normal childhood, there was a hope in her that at some time in the future her life would be useful in providing for children who had a less advantageous life than she had the good fortune to experience. As she grew older her desire to serve these children became stronger.

Through her aunt, Sister Mary Eucheria, a Sister of Providence of St. Vincent de Paul, Grace came to know of the Congregation. At 16 years of age Grace entered the novitiate of the Sisters of Providence. On August 14, 1932 Grace was accompanied by a cousin, Sister Monica, her cousin’s brother, Father McCoy, and Sister Victor, another cousin, to Kingston. The following day she and seven other young women entered the Community as postulants. When Father McCoy returned to her home in Mayo, he found Grace’s family waiting on the lawn expecting that she would return with him. They had not expected that she would stay in Kingston.

It seemed to Grace that such a dramatic change in her life would bring with it some distress, but surprisingly she slipped into the rhythms of convent life feeling happy and content. They were a large group of novices which allowed for the sharing of experience, feelings and aspirations. They became a family of their own offering each other support and encouragement.

Her first mission was an assignment to cook for the Sisters at St. John’s Convent in Perth, Ontario which was no hardship for her. More interesting for her was studying music and acting as assistant to Sister Carmel Theresa in the various duties at the parish church. Following this assignment Sister Grace went to Trenton then on to Chesterville, Newmarket, and back to Perth. In 1946 she went to Daysland, Edmonton, Moose Jaw and finally settled in Winnipeg in 1947. She thought that one could conclude that these frequent moves were an indication of a very bad performance as a nun, but she thought otherwise. She believed that moving about was her initiation in learning the will of God without question, of learning to adapt to new situations without complaint, all of which stood her in good stead as she prepared for the work which followed. She was told at that time by the General Superior, Mother Anselm, that she would be going to Winnipeg for just a while. That was in 1947 and she would remain there until 1995.

In Winnipeg she was assigned to work at St. Joseph’s Orphanage, caring for pre-school children. She had achieved her childhood dreams. She loved working with these little ones who were so in need of understanding and love. After nine years of working in the orphanage, the Sisters perceived a new need was emerging, that of Day Care for the children of working parents. To prepare for this undertaking she spent the summers of 1956 and 1957 studying at the Institute of Child Study in Toronto becoming qualified as Director of the proposed Day Care Centre. Later she took courses in Kindergarten programming in Winnipeg and a course at the Institute of Child Care at St. Louis University in St. Louis, Missouri. St. Joseph’s Day Nursery served the families of Winnipeg from 1957 until it closed its doors in June of 1992. Sister was an acknowledged leader in advancing the welfare of pre-school children and the Nursery often served as a model for other centres to emulate.

Following her retirement as Director of St. Joseph’s Day Nursery in 1988, Sister Grace took a short sabbatical at a Retreat Centre in Victoria, B.C. operated by the St. Ann Sisters. In the spring of 1989 she went to St. Paul’s University to take at Pastoral Health Care course. Once back in Winnipeg she continued the work in which she had been engaged while Director of the Day Care. She visited and administered Communion at Tuxedo Villa, Deer Lodge Hospital, Extended Care Facilities and visited the elderly and the sick in three private homes.

Sister often felt privileged to have been allowed to follow a path that was so right for her. Her life was enriched and made meaningful through the work she did. Sister Grace was a very hospitable person who welcomed with warmth and cheerfulness.

The Mass of Christian Burial, held in the Chapel of Mary Mother of Compassion, Providence Motherhouse on May 6, 2011 was presided over by Friar Edward Debono. O.F.M. Conv. Rev. Terry McGrath, a good friend of many years from Winnipeg, delivered the homily. Two of her ‘soul children’, Brother Arthur White, S.J. and Richard McIssac were in attendance as were her family members and many relatives.