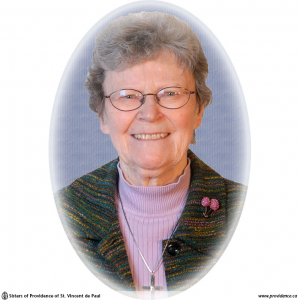 Grace Maguire was born on April 22, 1923 in Enniskillen, Co Fermanagh, Ireland, to Francis Maguire and Rose Burns, the tenth in a family of six boys and five girls. The family immigrated to St. Brides, Alberta in 1927 when Grace was four years old. The older members of the family remember very vividly the trip on the ship called the Meta Gamma and enjoyed the excitement of their journey. Her oldest brother, Charlie, remained in Ireland as he had just recently entered the Passionist Community and was ordained to the priesthood on June 15, 1935. Her parents made the decision to leave Ireland as they did not want to live in a divided country and they also wanted the family to have opportunities for education and employment which were not too probable for Catholics in Northern Ireland.

Life was hard for the first few years as the family had to homestead the land and begin a whole new life on the prairies. Her parents made many sacrifices to make a home for their ten children and to see that they received a good education. In 1928, one year after arriving in Canada, her brother, Kevin, died as the result of a tragic farm accident. It was the saddest day of their lives and even though Grace was only fives years old she could remember the sorrow. Kevin was the first to be buried in the St. Brides cemetery.

Her sister, Kathleen, entered the Sisters of Providence of St. Vincent de Paul in Kingston in 1935 after having worked with the Sisters at St. Joseph’s Hospital in Edmonton.

Grace attended elementary school with the Sisters of Service and the Sisters of St. Joseph of London in St. Brides and received her senior matriculation at St. Mary’s High School in Edmonton. In those days money was scarce so she worked at Rosary Hall for her room and board and at St. Joseph’s Hospital. While waiting to enter the General Hospital School of Nursing, Grace decided to take a business course at Alberta College. During her association with the Sisters of Providence, she was touched by their dedication and prayer life. Following a visit from Mother Anselm, Grace was encouraged to enter the Community and train as a nurse following her novitiate.

It was difficult to break the news to her parents as they thought they would never see her again and this would be the third member of the family to leave them. Kingston was a long way in those days and money for travel was scarce, especially with a large family.

Grace entered the Novitiate on February 2, 1943 and took the name Sister Mary Fanchea, Fanchea being the name of an Irish saint and also her youngest sister’s name.

After making Profession on March 19, 1945, Sister worked at the House of Providence looking after Mother Gabriel until she left for St. Mary’s Hospital in Montreal to begin her life-long dream to become a nurse. These were some of the happiest years of her life. She graduated on May 28, 1948 with the highest marks in theory and she received the Gold Medal for General Proficiency. Her only regret was that none of her family was able to attend the graduation, but she did have one guest, Father Timothy O’Sullivan, CSsR, whom she had nursed while he was a patient at St. Mary’s Hospital. He represented her family and they kept in touch throughout his life.

Sister’s first assignment after graduation was at St. Vincent de Paul Hospital in Brockville where she worked in maternity, surgery, medicine, and was the night supervisor and operating room supervisor. The three years she spent there were challenging years but she enjoyed them. During these years she met many wonderful people who remained her friends.

Sister Grace spent one year in Daysland and then attended the University of Alberta where she received a Diploma in Teaching and Supervision. This prepared her for her next big assignment, that of Director of the School of Nursing at Providence Hospital in Moose Jaw, Saskatchewan, until it was phased out in 1970. Sister received her B.Sc.N.  from the University of Ottawa in 1961 and her M.Sc.N. in Administration from the Catholic University of America, Washington, D.C. in 1969. In 1970 she went to St. Vincent de Paul Hospital in Brockville as Superior and Director of Nursing. In 1971 she was elected as the Assistant General Superior for a six year term. During her last year on the General Council she was the Administrator of St. Vincent de Paul Hospital in Brockville.

In 1992 Sister was missioned to St. Mary’s Hospital in Camrose and became the Vice-President, West of the Providence Health System. She was on the boards and committees of the Alberta and British Columbia health facilities until December 1998. She then began volunteering at the Good Samaritan Nursing Home in Edmonton. She asked to volunteer on the Alzheimer’s Unit as this was an area that needed understanding and loving care both for the residents and their families. She also assisted with the Catholic services at the Home. Sister Grace remained active until her sudden death on February 16, 2009.

Sister Grace, a gifted and talented woman with her share of Irish wit, was a natural leader. She was highly respected and loved by all those with whom she worked. She always had time for people, whether they were a patient, an employee in housekeeping or maintenance, a medical person or a visitor. Sister Grace was a trusted and faithful friend.

The Mass of Christian Burial, held in the Chapel of Mary Mother of Compassion, Providence Motherhouse on February 24, 2009, was presided over by Most Rev. Brendan O’Brien, Archbishop of Kingston, assisted by other members of the clergy. Rev. Msgr. Don Clement was the homilist. Many family members were in attendance as were several members of the staff of St. Mary’s of the Lake Hospital.