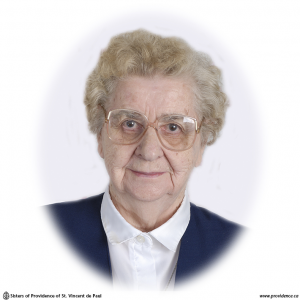 Sister Gracia Whalen (Catherine Agnes Whalen) of the Sisters of Providence of St. Vincent de Paul died peacefully on December 14, 2012 at Providence Motherhouse, Kingston, Ontario in the 71st year of her Religious Life.

Sister Gracia was born in Belleville, Ontario on March 7, 1922, the fourth of thirteen children of Peter and Margaret (Gannon) Whalen.

She entered the novitiate on February 2, 1942 and following her first profession of vows she was assigned to Providence Manor to care for the elderly.

Her main ministries throughout her religious life were caring for the elderly and nursing the sick at St. Joseph’s Hospital, Edmonton, St. Vincent de Paul Hospital, Athabaska, St. Anthony’s Home, Moose Jaw, the Father Dowd Home, Montreal and St. Mary’s of the Lake Hospital, Kingston. She took the R.N.A. course at St. Vincent de Paul Hospital in Brockville. She also spent some time at St. Joseph’s Vocational School in Winnipeg caring for the senior boys.

In 1971 she accompanied a group of handicapped people on a Jean Vanier pilgrimage to Lourdes. Sister then ministered to the sick in their homes in Perth for a year. She was very attentive to the sick and dying especially praying with and for them.

After a well-deserved sabbatical in Arnprior in 1984-85 she took on foot care ministry at the Motherhouse. She was also a faithful volunteer at Martha’s Table where she brought a genuine compassionate presence to those to whom she ministered.

Sister Gracia touched and supported many people throughout her life. Her family loved and respected her and cherished memories of her visits with them.

The Mass of Christian Burial, held in the Chapel of Mary Mother of Compassion, Providence Motherhouse on December 20, 2012, was presided over by Most Reverend Brendan M. O’Brien, Archbishop of Kingston. Rev. Whalen delivered the homily.