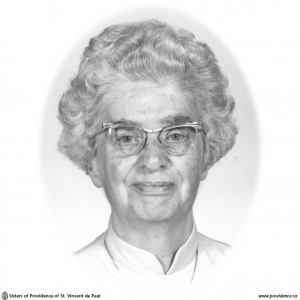 Some people make an impression not by their physical size but by the size of their hearts. Sister Hannah was one of these special people. She preached the gospel, simply by the quiet, kind way in which she served others all of her life. Those who were close to Sister Hannah were impressed by the fact that she had no fear of death, but looked forward to going home to God. God called her home on July 23, 2001.

Born on April 29, 1913 in Glasgow, Scotland, the second youngest of seven children, Hannah immigrated to Montreal, Canada with her parents and four siblings to join two of her older brothers who had already come to this country. Although always proud of her homeland and a lover of the bagpipes, Hannah’s family was really of Irish descent. She was equally eager to dance an Irish jig or a Scottish fling. One of the first sights that delighted her in Canada was of people skating on an outdoor rink. As soon as possible she procured a pair of skates and learned how to join in the fun. The first year Hannah was in Canada she stayed home from school because of her poor health. She had a slight heart defect.

Before Hannah responded to the call to religious life she worked for the Eaton’s Mail Order Office. On August 15, 1936, at the age of twenty-three, Hannah entered the Congregation. Her parish priest in his letter of recommendation said he considered Hannah to be amongst the best young ladies in the parish. He described her as being of the highest moral character and blessed by God with one of the most even dispositions that he had ever known. She was a willing worker and ever ready to do more than her share of any tasks assigned to her.

After Hannah made profession of vows she was missioned to Arnprior, and from there, over the years, she served her sisters in fifteen of the congregation’s convents, both in the East and in the West. She was one of the first four Sisters who opened Holy Family Hospital in Vancouver in 1950. Her companions were sisters Rose Bekar, Mary Alacoque and Catherine Dooley.

Most of Hannah’s energies were spent in cooking and in homemaking but she also found time to visit the sick and to take part in parish activities wherever she was. She especially, loved to visit the elderly. Sister Hannah enjoyed working for a time in the altar bread department. In 1978 Sister took a home helper’s course at St. Lawrence College. She became the registrar for Homemakers and coordinated visits for ill people confined to their homes.

When ill health forced Sister Hannah to move to Marian Two Infirmary, she continued to take an active part in as many activities as possible. Until her eyesight failed she liked to read and to knit. Hannah loved to have visitors, especially from her relatives, many of whom came from a great distance. When her only surviving brother, Christopher was no longer able to travel from California, her devoted niece, Joyce came as often as she could. Shortly before Hannah died another niece, Mary (Quesnel), from Bainsville, Ontario, had a nice visit with her. Members of the nursing staff remarked that Hannah was always a pleasure to care for.

At Sister’s wake, several sisters and friends remarked on Hannah’s gentleness, kindness and sense of peace. She told those who came to see her near the end that she knew she was dying and she was not afraid. When someone offered to call a priest for the sacrament of reconciliation, she quite candidly said she did not have any sins to confess. Hannah, who loved children, left behind her a large collection of family photos, mostly of the children in the family.

The Mass of Christian burial was celebrated in the Chapel of Mary, Mother of Compassion, Providence Motherhouse on July 26. In his homily Monsignor Tom Raby remarked that the readings from the feast of the Sacred Heart were very appropriate, as Sister Hannah was called not because of her size, but because she was loved. She responded to God’s call of love by a life of service. Whatever is done out of love is never small. Sister Hannah taught us all that important truth. May she rest in peace.