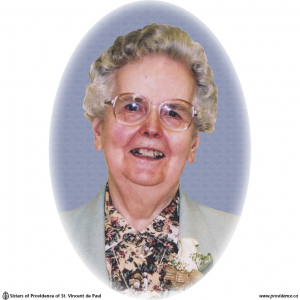 Helen Maloney was born at Mount St. Patrick on August 4, 1926, the middle child of nine children born to Margaret McDonald and John Maloney. Her mother, being a teacher, taught the children many things before they went to school. Both parents taught the children through stories. Helen and her siblings attended a one-room rural school walking over three miles to school every day. When it came time to attend high school, she boarded with the St. Joseph Sisters in Mount St. Patrick where she attended school. After completing Grade 12, she remained home to help while her younger siblings continued their education. She then went to Ottawa to work in the Bank of Canada.

Having her aunt, Sister Mary Alda, in our community must have had an influence on her joining the Congregation. On February 2, 1952 Helen entered. After making her first profession taking the name of Sister Mary Celestine, she attended the six week summer school in Toronto and later attended Toronto Teachers’ College. Her teaching ministry took her to Smiths Falls, Holy Family School in Kingston, St. Michael’s Academy, Belleville, St. Joseph’s School, Prescott, Sacred Heart School, King and St. Thomas More School in Kingston. She taught Grades 1 to 10 and was principal in three of the schools until 1971.

In 1971 she spent some time at the Father Dowd Home in Montreal helping with the chapel and the Sisters’ dining room and at St. Mary’s of the Lake Hospital, then at the Motherhouse to assist with the switch board. In 1975 she went to Rosary Hall, Edmonton. Here she worked with and ministered to many women suffering from mental illness. Her 19 years of ministry were hard physically, but very rewarding. Her eyes lit up whenever she spoke of the women at Rosary Hall. She loved them dearly.

In September 1994 Sister Helen went to Providence Manor to take up duties as sacristan. She often spoke of how much she appreciated being able to look after the Chapel. She did this with perfection. At times there were as many as 5 priests in residence and she took great delight in making sure that their albs and stoles were in good repair and meticulously clean.

During her first two years at Providence Manor, Sister Helen’s role as Sacristan became quite arduous as a major renovation of Our Mother of Sorrows Chapel took place. Mass was held in one of the dining rooms and a little office became the sacristy. The laundry was a considerable distance from both rooms. This entailed a great deal of walking and transferring of vestments and vessels. Never did Sister Helen complain.

Sister kept a list of those residents who wished to receive missalettes and the Sacred Heart Messenger, ordered the subscriptions and distributed them monthly.

Sister Helen’s mild manner enabled her to relate to and work with the various chaplains. Sister visited the residents almost every day. She was particularly attentive to persons who did not receive many visitors. When returning from the floors after visiting someone who was unable to communicate, she would frequently comment that there were worse things than dying at a young age.

Sister considered her greatest blessing was having the honour of assisting Monsignor Andy O’Neill as he celebrated daily Mass in his room for the last three or four years of his life. At times when he was very tired this could be a slow process but Helen, never losing sight of the individual’s dignity, would always wait patiently. Besides being present for Monsignor’s Mass, Sister Helen assisted him with his breakfast and noon meal for a year or more. Over and over again Sister Helen would comment on the wonderful privilege it was for her to assist Msgr. O’Neill.

Sister Helen also had great respect for the housekeeping and maintenance staff. She knew each of them by name and took time to speak to them. It was evident how much they appreciated Helen as they continuously inquired about her.

Sister Helen’s congeniality made her an easy person with whom to live in community. Her interest in world and congregational events was evident in her conversation even if her energy would not always permit her to attend congregational gatherings. Helen was a true friend with whom one could entrust one’s deepest concerns. Her deep faith was evident especially in times of illness or a flu epidemic at the Providence. At St Roch’s statue there would appear a candle. The prayer to St. Roch would be made available for anyone who wished to say it.

Although Sister Helen’s health began to deteriorate rapidly and it was becoming more difficult for her to attend to her duties as sacristan, she did not want to give in. She was using a walker and still setting up vestments and preparing the altar. Sister was suffering intense pain when she finally agreed that she should go to the Motherhouse until she was better.

It took considerable time before Sister came to the realization that she would not be able to return to her beloved Providence Manor.

Sister Helen lived a life of deep humility, simplicity and charity. May she rest in the peace of Christ.