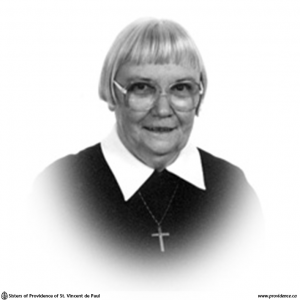 After Sister Helen’s death some people remarked that she must have been very special because she was born on the feast of the Annunciation, March 25, 1924, died on the feast of St. Vincent de Paul September 27, 2001 and was buried on the feast of the Little Flower, on October 1, 2001. Those who knew Helen well already knew her to be special simply because of the quiet faithful example of her life.

Helen Mary McFadden was the second of three girls born to Edward McFadden and Anna (Matier). When Helen came into the world her family lived on Patrick St. in Kingston close to St. John’s School. Besides Helen and her sisters the McFadden family adopted a cousin, Harold McFadden, who grew up with the girls. After elementary school at St. John’s where Helen became very fond of Sr. Mary Jovita (Sarah Howell), she attended Notre Dame Convent for two years. Helen worked for a time in the dining room at Queen’s University where she was paid a salary of $16-$20 a month. Helen also worked as a cashier at an A&P store until she entered the novitiate of the Sisters of Providence in 1948. After nine months she became ill and returned home for three months. When she recovered Helen returned to the convent and she made her profession of vows in 1950 taking the name of Sister Mary Karina. Some years later she chose to return to her baptismal name.

As long as she was able Sister Helen worked quietly in housekeeping service and enjoyed helping out at the St. Vincent de Paul Society. She also visited shut-ins. In her spare time Helen enjoyed reading and listening to music.

In 1991 Sister Helen had an operation for cancer. She became confined to the infirmary because of her special needs. In spite of her disabilities and although, often in pain, Sister Helen remained kind, sympathetic and helpful to the other sisters. During her last years Sister became a person of deep prayer, as well as a rock of common sense. She always accepted her limitations and did her best to be patient under difficult circumstances.

Sister Helen loved her family dearly and they were devoted to her. Although her sister Eileen’s children often lived at a great distance, they kept in touch and never missed an opportunity to visit Sister Helen when they could. Her nieces, Kate, Jane and Marnie, along with some members of their families and several other cousins, friends and many of her fellow Sisters of Providence attended her wake service and shared how much Sister meant to them. Her nephew-in-law, Art Kidd, who was a pallbearer, said that Sister Helen was an absolute joy to visit and he appreciated her great sense of humour. Others described Sister as a guiding light in their lives and as someone who never judged others by their appearance but by their character. In her quiet way of innocence and simplicity she would have been surprised at how much influence she had on others.

The Mass of Christian burial presided over by Most Reverend F.J. Spence was celebrated in the Motherhouse chapel of Mary, Mother of Compassion on October 1, 2001. In his homily Monsignor T. Raby remarked how appropriate it was that Sister Helen’s funeral occurred on the feast of St. Therese of Lisieux, as their vocations were both grounded in the love of God and their sufferings became a large part of their prayer. Like Therese, Sister Helen touched the lives of all those who knew her, through her deep love for Jesus.

Sister Helen is pre-deceased by her parents and by her sisters, Eileen, Evelyn and Genevieve. Besides the members of her religious community Sister Helen will be fondly remembers by her brother-in-law, Fred Millotte and his wife, Margaret, by her nephew, Ted Dunlop, and by her nieces, Kathryn, Marnie, Jane and their families.