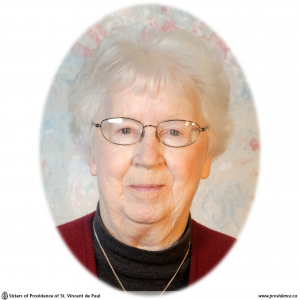 Mary Inez Donovan was born in Smiths Falls on December 29, 1918 the second oldest of 6 children of Cornelius Bernard Donovan and Bridget Agnes Smith. She grew up on the family farm in Toledo and received her elementary education in a small country school in Kitly Township. She learned to work hard at an early age doing farm chores and milking. Great sadness visited her family on July 12, 1931 when her mother died in childbirth. Her Aunt Maggie stayed with the family and helped her father raise the children ranging in age from 14 to 4 years. In 1934 her father sent her to Maryvale Abbey boarding school in Glen Nevis for her high school education. The Sisters of Providence of St. Vincent de Paul ran the school. Earlier on she had met the Sisters when they visited her home while collecting for the poor, aged and orphans in their care. After Grade XI, Inez requested to join them. So on August 15, 1936 she entered the Novitiate in Kingston.

After making Profession she returned to Maryvale Abbey to complete her high school and then in 1940 she went to Ottawa Normal School. Her teaching career from 1941 to 1974 included several years of teaching Kindergarten to Grade 4 children in St. Margaret’s School, Glen Nevis, St. Joseph’s, Kingston, St. Mark’s, Prescott, St. David’s, Toronto, St. Malachy, Montreal and Holy Family School, Kingston. Sister received her B.A. from the University of Ottawa in 1959. In 1958 she moved into teaching high school at St. Michael’s Academy, Belleville, and then at St. Malachy’s Montreal. In 1962 she was assigned as principal of St. Joseph’s School in Arnprior. In 1965 she went to St. Francis School, Smiths Falls where she assumed the duties of Superior of the convent with her teaching. Her last year of teaching was at St. John’s College, Brantford. She then began the ministry of Pastoral Work in the Kingston parishes of Holy Family, Blessed Sacrament, St. Joseph’s and Good Thief. During that time she served eight years on the Leadership Team. Following her time in leadership, she enjoyed a sabbatical year in the Credo Program in Spokane, WA. During the next three years she ministered in Parish Work in Arnprior. In 1989 she went to Holy Family Hospital, Vancouver to minister in Pastoral Care. While in Vancouver, she was visited with cancer, but thanks to prayer and good doctors she overcame this dread disease. In September 2000 she had three months sabbatical at Queenswood, Victoria and then returned to the motherhouse as Coordinator of one of the groups. Following a brief illness, Sister Inez was called home peacefully to her loving God on March 11, 2011. Sister will be remembered for her common sense, great kindness and compassion as well as her deep love for her family and her religious congregation.

The Mass of Christian Burial, held in the Chapel of Mary, Mother of Compassion, Providence Motherhouse on March 15 was presided over by Rev. Gerald Donovan, s.f.m., Sister’s brother, who also delivered the homily. Other members of the clergy were in attendance as were many family members, relatives and friends.