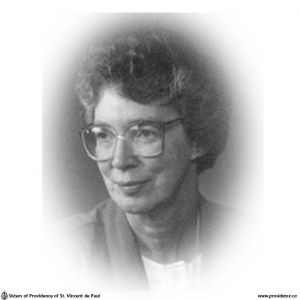 “If you really love people and have a desire to journey with them through the ups and downs, you will love life because you will know that your God is the ever-faithful One who accompanies you on the journey and promises you fullness of life.”

These words, to young women contemplating a call to become a Sister of Providence, were spoken by Sister Irene Forrester, who herself entered into that fullness of life on February 16 2001.

The first child of Lillian and Harvey Forrester and the first grandchild on both sides of the family, Irene was born in Montreal on November 8, 1933. Born with a slight defect of her left hand, Irene was made to feel very special by the entire family. Eight years later she was thrilled to have a baby sister, Diane.

Irene received her elementary education from the Sisters of Notre Dame. In 1950 she began training in cytology at Montreal General Hospital. Later, she moved to St. Mary’s Hospital, Montreal, where she continued to work until she entered the congregation of the sisters of Providence of St. Vincent de Paul in 1956. She was attracted to this congregation because it had health care ministries and was English speaking. It was very difficult for Irene to say goodbye to her family and to miss the wedding of her best friend. She admitted that she was very lonely in the novitiate and cried a great deal. However, when her dad came to visit her a few weeks later Irene was able to tell him that in spite of her tears she was happy and wanted to stay. She loved the companionship of the other sisters and the laughter which outweighed the hardships.

After Irene pronounced her vows, taking the name Sister Mary Kevin, she was posted to Providence Hospital, Moose Jaw where she completed the program in Medical Technology. Through the years she worked in hospital laboratories in Alberta and in Ontario. Sadly, while Irene was out west the marriage of her sister broke up. Irene’s niece, Elizabeth, was only three at the time. Sister Irene longed to be closer in order to be more supportive to her family. In 1972 she became superior at Providence Manor, Kingston and enrolled in commerce studies at Queen’s University. She also took a correspondence course in Health Care Organization and Management with the Canadian Hospital Association which involved extramural study at the University of Winnipeg. She graduated with her BA from Queen’s and completed the CHA program in hospital administration. In 1977 Irene was assigned as administrator of St. Vincent de Paul Hospital in Brockville. In 1980, in recognition of her service as secretary to the Order of the Hospital of St. John of Jerusalem, Canadian Priory, Sister Irene was presented with a medal from this organization by the governor General of Canada.

In 1989, already experienced as General Assistant to Sister Nancy Wilson, Irene was elected as General Superior of the congregation. As General Superior Irene traveled to Peru, Guatemala, and South Indian Lake, Manitoba, where, she was profoundly touched by seeing the gospel through the eyes and ears of the poor. These years gave her exposure to the issues of patriarchy, feminism and other justice concerns. In 1993 Irene was presented with a Commemorative Medal at Kingston City Hall, by Peter Milliken MP for her leadership in the many health and community projects of the Sisters of Providence of St. Vincent de Paul, in the Kingston and Brockville communities.

In 1994 Irene moved out of a leadership role, in part to deal with the loss of both her loving parents. She also learned that her only sister had multiple sclerosis, and was consoled knowing that she had the love and support of John LeGros, whom she later married. Diane and John moved to Kingston. Irene was happy when her niece, Elizabeth and her good friend, Edwige also moved into the Kingston area. In 1995, Irene traveled to Arizona where she expected the weather would help her painful back and hip problems. She also enjoyed a quick trip with Sister Irene Wilson, through ten cities in Europe. Both of these vacations were re-energizing.

Irene enrolled in the Integration for Ministry Program in Regis College, Toronto and she took part in the forty-day institute in the spiritual exercises of St. Ignatius in Guelph, Ontario. She also took a CPE unit which gave her a further opportunity to share and grow in the gospel values of Jesus’ healing ministry. As a pastoral visitor, having herself coped with cancer surgery, Irene endeared herself to the sick, and to members of the Kingston General Hospital staff. A fellow member on the pastoral care team remarked that she would always remember and treasure the hours she shared with Irene because she found her to be so very gentle and kind.

Early in the fall of 2000 Irene was appointed coordinator of the Sisters in Marian 2. During her short time in this position Irene was loved and appreciated by the Sisters and the nursing staff where she herself was, all too soon, to become a patient. It was with great sorrow that her sisters and loved ones learned in November 2000 that Irene’s cancer had returned. Several treatments were tried and heaven was stormed by many prayers, especially through the intercession of Emilie Gamelin. Because of necessary pain control methods, Irene had to spend her last days in Kingston General Hospital, where a circle of love and support formed around her, until on February 16, 2001 God saw fit to call her home.

The wake service was crowded with sisters, family and friends. Many remarked on Irene’s wisdom, her strong compassionate leadership, her openness, love of her congregation, her sense of humour, warm smile and love of life.

Archbishop Francis Spence, accompanied by many priests, and a woman United Church minister presided at the Mass of Christian Burial in the Motherhouse chapel, Mary Mother of Compassion on February 20, 2001. In his inspirational homily, Rev. Joseph Lynch said that the presence of so many friends testified to the fact that Irene loved, and was dearly loved in return. The key words to describe Irene were compassion and dedication, to her community, family and to her God. He reminded everyone to be consoled because Irene is free and now at peace with God.

God gifted the Sisters of Providence in the person of Irene Forrester. That gift has been cherished and shared for more than forty years. We will all miss Irene, but now we hand the gift of her life back to God in gratitude.