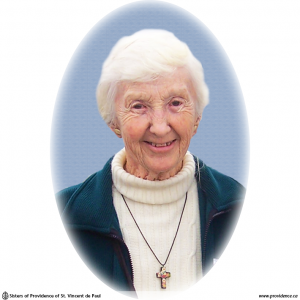 Irene Janet Theresa MacDonell was born on July 1, 1932 in Alexandria, Ontario, the youngest of seven children of Mary MacDonald and Angus MacDonell. Since her mother died shortly after Irene was born, she was raised by her aunt and uncle, considering them as her parents and their family as her family.

She received her elementary education at St. Margaret’s Convent in Alexandria and after completing her secondary education at Alexandria High School she went to Teachers’ College in Ottawa and then taught at the Ontario School for the Deaf in Belleville thus qualifying her as a Teacher of the Deaf.

She entered the Postulancy of the Sisters of Providence of St. Vincent de Paul on September 19, 1953. She was assigned to St. Paul’s School in Kingston from September to March of 1954 at which time she began her Canonical year of the Novitiate. After making her First Profession of Vows on March 19, 1956 she was assigned to St. John’s School in Kingston where she soon became Principal. She remained in this position until she volunteered for mission work in Latin America in 1967. She was first assigned to Guatemala and then transferred to Peru in 1970.

She was assigned as a Pastoral Agent and a member of the Parish Team in El Progreso, Corabayllo. This work involved leading small groups of discussion and reflection with High School students and adults. She involved parents in their children’s First Communion preparation, a successful new experience for them. In 1974 she became an assessor of the Christian Workers’ Movement which was involved in the work of evangelization within the working class in Peru and consisted in the formation of lay leaders and small Christian Communities.

In 1991 she launched the Associate Program which grew and developed under her capable direction and guidance. By the mid 1990’s she was in charge of aspirants to religious life and the formation of new members.

Sister Irene was totally committed to the poor and she loved to laugh and sing and dance with them. She knew how to empower others especially the women.

When her health began to fail she returned to Canada to take up residence at the Motherhouse infirmary in March of 2011.

The Mass of Christian Burial, held in the Chapel of Mary, Mother of Compassion, Providence Motherhouse on July 24, was presided over by Rev. John (Jack) Lynch, SFM who also delivered the homily.