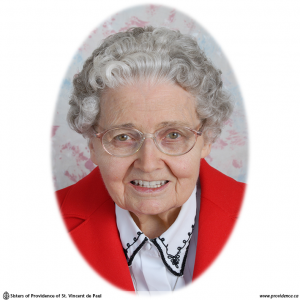 Sister Jean was born in Carmangay, Alberta, on January 23, 1925, and entered the Novitiate on January 30, 1947. During her religious life, Sister Jean worked as housekeeper in the convents in Perth, Picton, Prescott and Edmonton. Her longest and best loved ministry was in Holy Family Hospital in Vancouver working as an Activity Aide in the Occupational Therapy Department from 1957 – 1978. Sister Jean was very gifted with her hands and could do all kinds of crafts and needle work. In 1978 she left occupational therapy and took a course in pastoral care at St. Paul’s University in Ottawa, and returned to Holy Family Hospital to minister in pastoral care until 1985. The following year she spent her sabbatical time in Arnprior. In 1987 she went to Moose Jaw to become part of the Pastoral Care Team at Providence Hospital and later was delighted to return to Vancouver to continue pastoral care work at Holy Family Hospital until her retirement to the Motherhouse in 2002.

Sr. Jean died peacefully on February 26th at Providence Motherhouse in the 64th year of her religious life surrounded by several Sisters. She was dearly loved by all with whom she lived and ministered. She was a very gentle, unassuming and spiritual person with a good sense of humour and great compassion.

Sister Jean is predeceased by her parents, Alexander Edey and Margaret Ann Murphy, her brothers, Gordon, Charles and Jack, and her sisters, Margaret Preston and Loretto. She is survived by her brother, Raymond of Grande Prairie, Alberta, her sisters, Mary Olinger of Kelowna, BC, and Eileen Pringle of Pouce Coupe, BC.