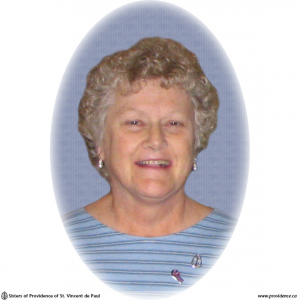 Margaret Jean Higgins was born on August 21, 1943 in Belleville, Ontario, the third oldest of thirteen children of Edith Dempsey and John Higgins. She trained as a Registered Nursing Assistant at St. Vincent de Paul Hospital in Brockville graduating in 1960.

On September 8, 1961 she entered the novitiate of the Sisters of Providence of St. Vincent de Paul in Kingston. From 1964 until 1978 she worked as a Nursing Assistant at St. Mary’s of the Lake Hospital and Providence Manor in Kingston, and the Father Dowd Home in Montreal. In 1978 she became certified as an Occupational Therapy Assistant and then went Providence Hospital in Moose Jaw. From 1978 to 1984 she worked in the mission at Momostenango, Guatemala. In 1985 she worked with Hispanic people in Worcester, MA. The following year she went to El Progreso, Peru, and introduced the Associate Program. In 1988 she returned to Canada and worked in crafts at Providence Manor in Kingston. In 1991 she graduated as a Registered Massage Therapist and provided Massage Therapy at Providence Spirituality Centre until 2000. In 2005, Sister Jean had a heart transplant and following her recovery she became involved with the Transplant Advocate Association in Kingston.

During these later years Sister Jean was very faithful to being present to the dying Sisters. Sister Jean, who deeply trusted in God’s loving providence, touched the lives of many people especially her family and those in the Transplant Advocate Association.

Sister Jean was called home peacefully to her loving God on November 24, 2015. The Mass of Christian Burial, held in the Chapel of Mary, Mother of Compassion, Providence Motherhouse on November 30, 2015 was presided over by Most Rev. Brendan M. O’Brien, Archbishop of Kingston. Deacon Philip Carney delivered the homily. The Rite of Committal was at St.  Mary’s Cemetery, Kingston.