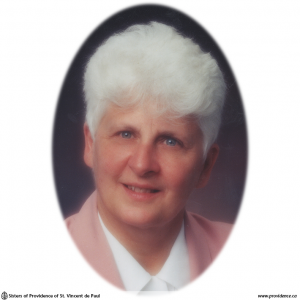 “My lifelong belief that adversity gives birth to greater depth, greater integrity and the opening of our eyes and hearts to God’s wisdom sustains me.”

These words spoken by the late Sister Joan Whittingham are indicative of the deep spiritual life which upheld her and endeared her to everyone privileged to know her over the years.

When Joan was told that her cancer had returned with a vengeance in the early spring of 2001 she decided to retire from Leadership and to use the time she had left to do what she did best, to be present to God, her family, community, friends and care givers. In doing so she endeared herself even more to all who loved her. She hoped to be healed physically, and cooperated with the treatment her doctors recommended. However, Joan placed herself into God’s hands accepting whatever God had in mind for her. The members of the community all prayed to the recently beatified, Emilie Gamelin soliciting support for Joan and her family. These prayers were answered. Joan showed us all how to live fully when faced by serious illness, and finally, how to die a beautiful faith-filled death. With immediate members of her family, several close community members and friends by her bedside, Joan returned to her God peacefully at St. Mary’s Hospital, Kingston on June 13, 2002.

Sister Joan entered religious life in 1959. She spent many years as a teacher in Quebec and in the Ontario Separate School System, as Religious Education Consultant, as a Pastoral Assistant and as Directress of Formation, before being called by her Congregation to serve in Leadership. Although her background was in education, Joan took a sincere interest in our healthcare institutions and the personnel involved in them. In all of her ministries, Joan endeared herself to everyone by her warmth, compassion and approachability. She cherished, and was cherished by many people from all walks of life. She awakened in everyone a desire to be the better persons they were called to be. When Joan visited our missions in Peru and Guatemala she was touched by the poverty that the people endured. Always sensitive to social justice concerns and in keeping with our mission, Joan was an active supporter of the congregational Justice and Peace Office and she instigated the Healing Violence Against Women Committee. She also was very supportive of the congregation’s involvement in environmental and ecological issues. She encouraged the sharing of our mission with others, especially with the Sisters of Providence of St. Vincent de Paul Associates.

Joan, who is predeceased by her mother, Rita (McIntee), will be dearly missed by her father, Edward Whittingham and by her brothers, Ward (Linda) of Montreal and Ted (Marjorie) of Ottawa. She will be fondly remembered by her nieces and nephews, Karen, Donna, Erin, Christopher, Timothy, Michael, and other relatives, as well as by the members of her religious congregation and by her many other friends.

At her wake a large crowd, encircled by many floral tributes, shared touching stories that personified Joan’s cheerful charisma, her love of life and compassion for people. Her compassion also extended beyond humans to animals, especially to cats that seemed to sense her love for them and were attracted to her.

The Mass of Christian Burial, held in the Chapel of Mary Mother of Compassion, Providence Motherhouse on June 18th was presided over by Archbishop F.J. Spence accompanied by many other members of the clergy. Our large Motherhouse chapel was packed to overflowing with people from near and far who came to pay tribute to this great woman of Providence. Her friend, Father Laurie Conlon OMI from Ottawa, delivered the homily in which he stressed that Joan lived the paschal mystery to the full. He urged us all to remember Joan as loving us and to contemplate the words that Joan often repeated whenever she left anyone, “God love you.”