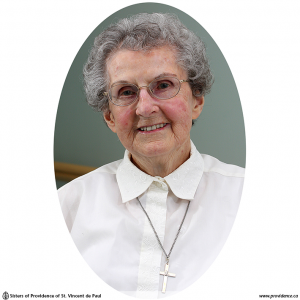 Joan Wing was born on April 30, 1922 in Gananoque, Ontario, the youngest of five children of Elizabeth Corboy and William J. Wing. She received her education at St. John’s Separate School and Gananoque High School. In 1943 she graduated as a registered nurse from St. Joseph’s School of Nursing at Hotel Dieu Hospital in Kingston. The following year on August 15th she entered the novitiate of the Sisters of Providence of St. Vincent de Paul in Kingston. At her First Profession she received the name Sister Mary Michael.

Following her First Profession in 1946, Sister went to St. Francis Hospital in Smiths Falls as the Operating Room Supervisor. In 1953 she did post graduate studies in Operating Room Nursing at Jersey City Medical Centre in Jersey City and took a course in Operating Room Technique at the Regina General Hospital in 1961. From 1959 until 1963 she was at Providence Hospital in Moose Jaw as the Operating Room Supervisor. From 1963 to 1982 Sister Joan was at St. Vincent de Paul Hospital in Brockville in the same capacity. The following year she enjoyed a sabbatical. During her sabbatical year she lived at St. Mary’s of the Lake and took a course in Church History at Queen’s University. At the same time she attended St. Lawrence College and took a course in interior design and decorating. Then in 1984 she became the Director of Nursing Service at Providence Manor and remained in this position until 1991 when she retired from nursing. St. Mary’s of the Lake was her last mission until the Sisters vacated the residence in April 1998.  During these years she experienced much tearing down and building, moving and renovating. For her it was a wonderful experience to see the new and modern facilities replace old and outdated buildings. During all this time of restructuring she met many dedicated hospital staff, medical, clergy and lay people willing and anxious to help the Sisters achieve the goal – Providence at work in our lives.

In 1998 Sister Joan became the care giver and companion for her sister, Mary, who lived in the country west of Gananoque. Sister lived with Mary until Mary’s death on July 20, 2003. It was at this time that Sister Joan took up residence at Providence Motherhouse. Sister Joan went home to her loving God very unexpectedly on Tuesday, August 23, 2011.

Sister Joan is predeceased by her parents, her brothers, Oliver David and John William and by her sisters, Mary Wing and Elizabeth Deir. She will be fondly remembered by her nieces, nephews, and friends and by the members of her religious congregation. The Mass of Christian Burial, held in the Chapel of Mary Mother of Compassion, Providence Motherhouse on August 26, was presided over by Friar Ed Debono, OFM Conv. The homilist was Rev. Michael Reed.