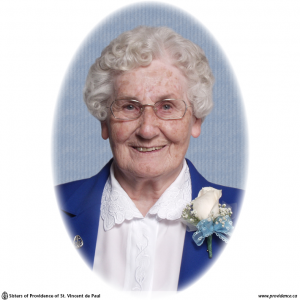 Josephine McCaffrey was born on March 2, 1918 in Fermanagh, N. Ireland, the seventh of ten children to Mary Hamilton and Patrick McCaffrey. Her father worked in a mill where flax was prepared for a linen mill in Belfast. Her mother made Irish lace for a company in Montreal and New York. Some of her older brothers and sisters left Ireland at an early age to make their fortunes in Montreal and New York. When Josephine was 16 years old she followed them to Montreal where one of her aunts found employment for her at the Mount Royal Hotel. While working there she attended night school until she obtained her Grade 12 Diploma. She then took courses in shorthand, typing and filing while she worked at Noordyne Aviation in Cartierville, Quebec. She boarded with the Sisters of Service on Dorchester St. in Montreal. When she moved to Toronto to work in a bank, she boarded with the Sisters of Service there.

She entered the postulancy of the Sisters of Providence of St. Vincent de Paul on February 2, 1946 after having met the General Superior at Rosary Hall in Toronto who invited her to Heathfield where, in her words, she said, “I became like the star of Bethlehem; I stopped and stayed.” She made her first profession of vows on March 19, 1948 taking the name, Sister Mary Kathleen. Sister’s ministries included sacristan, housekeeping and office work at Providence Manor, Kingston, St. Joseph’s Vocational School, Winnipeg, Rosary Hall, Edmonton, St. Anthony’s Home, Moose Jaw, Providence Hall, Belleville and St. Mary’s of the Lake Hospital, Kingston.

Sister Josephine was called home peacefully to her loving God on August 6, 2019 at Providence Motherhouse. She will be remembered for her cheerfulness and her wonderful Irish sense of humour. She brought joy and laughter to everyone with whom she lived and to whom she ministered.

The Mass of Christian Burial held on August 12, 2019 in the Chapel of Mary, Mother of Sorrows was presided over by Friar Edward Debono, OFM Conv., who also delivered the homily. Internment was at St. Mary’s Cemetery, Kingston.