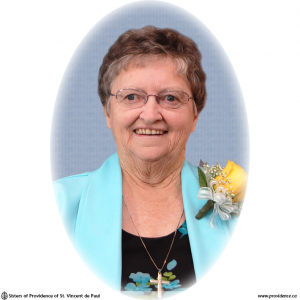 After completing high school at the age of 17 she entered the novitiate of the Sisters of Providence in Kingston on September 8, 1961 along with 14 other young women. After Profession she went to St. Malachy’s Convent so that she could attend the two-year program at St. Joseph’s Teachers’ College. Following graduation, she was assigned to St. Gregory’s School in Picton to teach grades 1 and 2 for three years and also piloted the ‘Come to the Father’ program. She made Final Vows on August 15, 1969 and returned to St. Malachy’s for one year to teach grade 3. She was happy to be close to home because her father was ill with cancer. On March 24, 1970 she was informed that she was chosen for the mission of Momostenango in Guatemala. She was delighted but she knew that this news would be difficult for her parents especially for her mother. On August 17 she with four other Sisters began four months of language training. On December 20 the Sisters were welcomed to Momostenango. Then on January 7, 1971 she received word of her mother’s sudden death. She returned home and remained until January 25 at which time she returned to Guatemala to begin her ministry of teaching young adults to read and write. In September she was summoned home once again to be with her seriously ill father. Following his death in November of 1971, she returned to Guatemala. By 1977 she realized that the losses she had experience had taken its toll on her health and so she returned to Canada for treatment. By 1980 she was well enough to return to Guatemala, this time to San Cristobal to work in catechetics. Her health began to fluctuate again and by 1986 when she returned to Canada for the Community’s Assembly and her Silver Jubilee she remained for treatment. She returned to Guatemala in January 1988. Then in May of 1990 she suffered a serious knee injury as the result of a pick-up truck accident. She returned to Canada to have knee surgery. In 1992 she returned to Momostenango and remained there until that mission closed March 29, 1999. She moved to San Cristobal and remained until that mission closed in February of 2003.

In May of 2003 she went to Perth to take up part-time pastoral ministry. Then in 2006 she returned to Kingston to live with the group at Watts Cres. She was accepted in the volunteer program at St. Mary’s of the Lake Hospital to offer spiritual care, to visit the patients and to assist with the lunch program. After taking the 8-week course offered on Monday afternoons she volunteered in Palliative Care.

Because of her passion for justice she participated in the Friday Silent Vigil at City Hall as often as possible. She was a member of the Guatemalan Solidarity Group in Kingston. She was also the Contact Sister for the Associates in Momostenango and for groups in Kingston and served on the Providence Associates Committee.

When her health began to fail she moved to the Motherhouse in 2010, but continued her ministries to the extent that she was able. Sister Judith was dearly loved by all with whom she ministered.

The Mass of Christian Burial, held in the Chapel of Mary, Mother of Compassion, Providence Motherhouse on Friday, October 19, 2018, was presided over by Most Rev. Brendan O’Brien, Archbishop of Kingston. Friar Ed Debono, OFM Conv., delivered the homily.