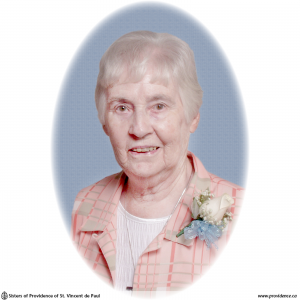 Sister Julia Hamilton was born on January 20, 1922 on a farm at Elgin, Ontario, the third of six children of John Hamilton and Margaret Scanlan. She received her elementary education in a one-room rural school and her secondary education at Notre Dame High School in Kingston. When her oldest sister, Mary, entered the novitiate of the Congregation of Notre Dame, Julia expressed a desire to join her. However, her mother feeling that Julia was too young, wisely encouraged her to go to Teachers’ College. After graduating, she wrote the civil Service examinations and worked for four months at the Dominion Bureau of Statistics in Ottawa. In August of 1942 she was hired to teach at the school at Chaffeys’ Lock which was two and a half miles from her home. For the next four years she taught all eight grades in this rural school. She was happy to live at home during these years walking or cycling to school each day. In her parish at Elgin she taught catechism after Mass each Sunday and took part in other parish activities.

In August 1946 she entered the novitiate of the Sisters of Providence of St. Vincent de Paul in a group of fifteen. As a postulant and later as a senior novice she taught in one of the Kingston schools. During her novitiate she was saddened by the sudden death of her mother. She admits that she was tempted to remain home with her grieving family. But her father and brother convinced her that they could manage and didn’t want her to give up her choice of vocation.

At her Profession she took the name Sister Mary Alexander and was assigned to teach Grade 2 at St. Mary’s School in Kingston and lived at the House of Providence. The following year she moved back to the Motherhouse and went to the newly opened St. Joseph’s School where she remained for nine years, the last six years as principal. During the summers she taught catechism in the parishes of Bedford, Elgin, South Mountain and Dixon’s Corner. In 1957 she was named principal and Grade 8 teacher at St. John’s School in Arnprior. During these years she attended the University of Ottawa and obtained her BA and later obtained a High School Assistant’s Certificate at the College of Education in Toronto. In 1960 she was missioned as principal to St. John’s School in Perth and for the next seven years she taught Grades 9 and 10.

After 24 years of teaching, she answered a call, a bit fearful, to volunteer for the Latin American missions. She was chosen to go to Guatemala. She spent 37 years in Guatemala mostly in San Cristóbal, Totonicapan. Three of those years she spent in Momostenango and two years in San Francisco el Alto. During her years in Guatemala she taught reading and writing and sewing to adults, conducted classes in catechetics in schools and parish, and helped in the formation of catechists and Eucharistic Ministers. She also coordinated a committee of pastoral workers who attended to the needs of the most destitute. During one of her visits back in Canada she followed a Pastoral Care Course at St. Paul University in Ottawa which she found beneficial in her visits to the sick and aged.

Upon returning to the Motherhouse in 2004 she gradually adjusted to life here. She spent time as assistant to the coordinator of her group and visited the sick.

Sister Julia will be remembered as a woman of gentleness and kindness who loved life and gave life to others. It was said of her that she invested herself in the mission.

The Mass of Christian Burial, held in the Chapel of Mary, Mother of Compassion, Providence Motherhouse on June 19, 2017, was presided over by Most Rev. Brendan M O’Brien, Archbishop of Kingston. Friar Ed Debono, OFM Conv. delivered the homily. Burial was at St. Mary’s Cemetery, Kingston.