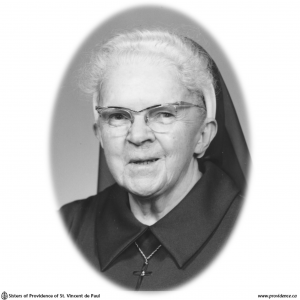 Kathleen Cafferty, one of five children, was born to John Syron Cafferty and Bertha Lucy Donaldson on September 8, 1903, in Brownsburg, Argenteuil County, QC. Kathleen was baptized in the Baptist Church, Stonefield, QC. After the family moved to Smiths Falls, Ont. while out for a walk on March 14, 1909, Mr. Cafferty took Kathleen to be baptized in St. Francis de Sales Church. Kathleen was warned by her father not to tell her mother what they had done.

In July 1919, on the advice of her confessor, Kathleen wrote to Mother M. Clement asking to be admitted into the Novitiate. Mrs. Cafferty opposed Kathleen’s desire to become a religious and asked her to wait a year. In the meantime, Mother M. Clement visited Mrs. Cafferty to advise her of Kathleen’s wishes. Kathleen entered the novitiate of the House of Providence on August 15, 1921, without her mother’s consent. She suffered greatly because the mother was never reconciled to her entering the congregation.

Sister Made profession on September 4, 1923, taking the name of Sister Mary Audry; she reverted to her baptismal name in 1967. In 1926 Sister attended the provincial Normal School in Ottawa and graduated in 1927. She taught Grade 1 for 42 years in Belleville, Arnprior, Gananoque, Prescott and Kingston. She was an outstanding and dedicated teacher who treated her pupils with dignity and respect. Her quiet, gentle, loving manner brought serenity to her junior grade students. With her ever present happy, trusting smile, it followed that she loved and was loved by the children and their parents.

Sister had the ability to perform well any task at hand. Her class was always in good order, especially if the music teacher or a visitor had to take over. Always most responsible, she was meticulously clean and kept everything in running order. Sister struggled with ill health for many years but this did not prevent her from faithfully fulfilling her duties as a teacher.

Sister Kathleen was most devoted to her immediate family and several cousins. Her favourite niece, Sheila Purcell, frequently visited with her when she was in Marian II.

For a short period of time after her retirement, Sister looked after the chapel at St. Mary’s of the Lake Hospital, Kingston, and at St. Anthony’s Home, Moose Jaw. Sister Kathleen retired to Providence Motherhouse because of her excellent sewing skills and worked for a while in the vestry department. She spent some years on the Marian I floor where she did not want to be a burden to others.

An avid reader, Sister passed many hours reading. She also frequently used her highly developed writing skills in her correspondence with relatives and friends.

As Sister’s health deteriorated, she found it necessary to ask to be moved to Marian II. She was always grateful for whatever was given her and was never one to complain.

Sister Kathleen died on September 4, 1993, in the 72nd year of her religious life. Archbishop Francis J. Spence, accompanied by several priests, presided at the funeral liturgy in the Chapel of Mary, Mother of Compassion, on September 7. Archbishop Spence delivered a warm and fitting homily. Her close relatives joined in the celebration of her life.