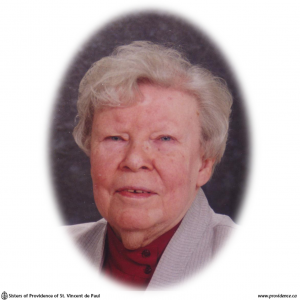 Kathleen Maguire was born on January 18, 1910, the fifth of eleven children. All eleven children were born in the family farm house near Moyglass, Ireland. When Ireland was divided in 1922, Mr. Maguire, not wanting to raise his children in a divided county and yearning to travel, chose Canada as the best country in which to settle. By 1927 the family was on the way across the Atlantic to Canada. The train trip from Quebec to Edmonton had many anxious and “scary” moments for her parents, but they arrived in St. Brides, Alberta tired and weary but happy to be settled. Kathleen’s oldest brother did not come to Canada with the rest of the family. He remained in Ireland and became a Passionist priest. After Kathleen completed her high school education in St. Brides, she went to Edmonton for an interview to begin training as a nurse. It was at St. Joseph’s Hospital that Kathleen met the Sisters of Providence in 1934 and she decided that she wanted to be a Sister after having worked with them. Sister Shirley Dunne who was very dedicated to the residents there became her mentor. Kathleen entered the Novitiate in Kingston in February 1935. After a long trip by train across Canada all by herself, she arrived at Heathfield in tears. She was met at the door by Sister Mary Stephanie who allayed all her fears with a “Cup of Tea”. In 1937 after two years of Novitiate, she went to Moose Jaw to train as a nurse. There was an epidemic of typhoid when she arrived and so her first days were spent in an atmosphere of concern and fear as the patients were very ill but the Sisters and nurses did not spare themselves in their dedicated care and that had a lasting impression on Kathleen. Upon graduating as an R.N. in 1940, she went to Daysland, Alberta, where she nursed until 1952. She then ministered in various capacities as administrator, director of nursing and superior in Camrose, Athabasca, Smiths Falls, Edmonton, Moose Jaw, Vancouver, Montreal and Kingston. After a sabbatical year in 1988 at Arnprior, she returned to Moose Jaw as Superior until 1992, when she retired to the Motherhouse. She kept busy with doing relief duties at the switchboard, knitting, reading, playing bridge and watching her favourite TV programs including sports and game shows.

Sister Kathleen’s deep faith, gracious hospitality, Irish wit and charm endeared her to all. Many people in healthcare facilities were touched by her compassion, deep commitment to quality healthcare as well as by her leadership abilities.

Sister Kathleen returned peacefully to her loving god on Wednesday, April 25, 2007 at the Kingston General Hospital with her sister, Sister Grace, and Sister Kathryn LaFleur and several other Sisters at her bedside.

The Mass of Christian Burial, held in the Chapel of Mary Mother of Compassion, Providence Motherhouse on April 28th was presided over by Most Reverend Francis J. Spence, Archbishop Emeritus of Kingston. Rev. Charles Gazelely delivered the homily. Other members of the clergy were also in attendance.