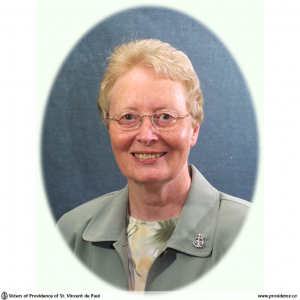 Kathryn Blanche LaFleur was born in Kingston on October 16, 1940 the youngest of 4 children of Evelyn Blanche Wiskin and George LaFleur. She attended St. John’s and St. Patrick’s Elementary Schools where she was taught by the Sisters of Providence, and Cathedral School where she was taught by the Sisters of the Congregation of Notre Dame. She was active in sports, class leadership, choirs and drama. By the time she was 13 years of age, she had lost both her parents. When she graduated from Grade 10 in 1956 she moved to Vancouver to live with her married sister, Marie, and her husband. There she completed her high school years at Our Lady of Perpetual Help School operated by the Sisters of Charity of Halifax. From Vancouver she entered the Novitiate of the Sisters of Providence of St. Vincent de Paul on September 7, 1958.

On March 19, 1961 she made her First Profession taking the name Sister Mary Catherine Louise and observed her Feast Day on March 15th, the Feast of St. Louise de Marillac. In September 1961 she was sent to Providence Hall in Belleville to study at Nicholson Catholic College. She was in the first group of Sister students to attend Nicholson.

Following graduation from Toronto Teachers’ College in 1964, Sister Kathryn went to Sacred Heart School in King City to teach Grades 6, 7 & 8. In 1968 she was assigned to the new Holy Name School in King City as the first principal and taught Grade 8. In 1972 she was missioned to St. Gregory’s School in Picton as principal, teacher and local Superior of the convent. In 1976 she was sent to Nicholson Catholic College in Belleville to teach English and Religious Studies in Grades 9 & 10. In 1977 she began working on her M.Ed. at Queen’s University. From 1976 – 1987 she worked in Guidance in Grades 9 – 13 and was Head of the English, Religion and Guidance Departments. From 1972 -1987 she obtained a BA from the University of Ottawa, a M.Ed. from Queen’s University, a Principals’ Certificate and Specialists Certificates in Guidance and Religious Education.

In 1995 she returned to Kingston where she lectured and worked on her book for publication. She also did free lance speaking, worked in parishes and conducted retreat days. From 1996 until 2003 Sister Kathryn was associated with Queen’s University Theological College as lecturer in the field of spirituality and as a member of the Spiritual Advisory Team. In 2006 she received the Outstanding Service Award from Queen’s Theological College.

In 2003 Sister Kathryn was elected as General Superior. Shortly after her election she was diagnosed with breast cancer. She embraced her illness with deep faith and trust in Providence and completed her term in June 2007.

In the various parishes where Sister Kathryn lived she served on the Parish Councils, was involved with the RCIA Program and the Youth Group Retreat Program, known as COR, was lector, Eucharistic Minister, and was involved with Prayer Groups and the CWL.

Within the Congregation Sister Kathryn has served as local coordinator, served on the Vocation Team, the Chapter Steering Committee, was a member of the Committee for the Revision of the Constitutions for the 1977 Chapter, and was elected Chapter Secretary for three General Chapters.

Most of all Sister Kathryn wished to be remembered first and foremost as a teacher. Through her ministry of teaching she had a profound impact on the lives of both staff and many young people from the elementary to post secondary levels of education.

After a life of total dedication to the mission of the Sisters of Providence of St. Vincent de Paul, Sister Kathryn was called home to her loving God on Wednesday, September 19th.

Sister Kathryn is predeceased by her parents, and her sister, Joan. She is survived by her sisters, Sister Mary Joan LaFleur of the Sisters of Providence of St. Vincent de Paul, of Kingston and Marie Cooke (Norman) of Bath, Ontario.

The Mass of Christian Burial, held in the Chapel of Mary Mother of Compassion, Providence Motherhouse on September 22, 2007, was presided over by Most Rev. Brendan O’Brien, Archbishop of Kingston, accompanied by many members of the clergy. Rev. Msgr. Don Clement was the homilist. Several of her colleagues from Queen’s Theological College were in attendance as were former students and many friends.