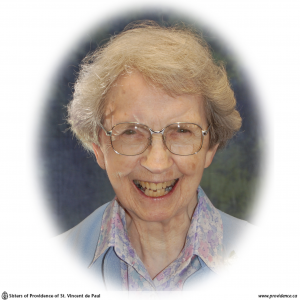 Mary Leona Fitzgerald was the third of eight children born to Catherine Agnes McAlpine and Patrick Fitzgerald on February 23, 1919 in Greenview, Ontario in a small farmhouse reached only by a road through the fields. She attended elementary school in Greenview, Grades 9 and 10 in Maynooth Public School, Grades 11 and 12 in Bancroft Continuation School and Grade 13 in St. Mary’s Academy in Lindsay, Ontario. In 1938 she graduated from Peterborough Normal School and began her long teaching career in the one-room Ontario rural schools in Prince’s Lake, (Nipissing District), Craigmont, Maple Leaf and Brechin.

Leona entered the novitiate of the Sisters of Providence of St. Vincent de Paul in Kingston on August 15, 1948. Following her First Profession, she returned to teaching with her first assignment at St. Joseph’s School in Kingston. After one year there she was assigned as principal and teacher at St. Gregory’s School in Picton. In 1959 she went to St. Mark’s in Prescott and in 1965 to St. Mary’s in Trenton until her retirement in 1984. After 44 years in education, she enjoyed a sabbatical during which she audited courses in Theology at St. Michael’s College and Regis College in Toronto followed by a trip to Ireland. In 1985 she was assigned to Rosary Hall in Edmonton for a year. During that year she, along with another supervisor, took the women from Rosary Hall to Expo ’86 in Vancouver for a few days. From 1987 to 1997 she ministered at the McKinley Centre at Providence Motherhouse assisting developmentally handicapped women. She then became sacristan at the Motherhouse until she suffered a fractured hip in July 2002.

During her long teaching career Sister Leona received her BA from University of Ottawa in 1965, her Supervisory Officer’s Certificate in 1976 and her Masters of Education from Queen’s University in 1977. As well she received her Elementary School Principal’s Certificate and Ministry of Education certificates in Vocal Music, Arts and Crafts, Intermediate Mathematics, Language Arts, Social Studies, Intermediate Special Education and Religious Education.

Sister will be remembered for her keen interest in and loving care for her students, especially the disadvantaged, her untiring dedication to her teaching and administrative duties as well as her love of a good game of bridge and her ability to recite poetry and sing her favourite Irish songs.

After being confined to the infirmary for the last few years, Sister Leona went peacefully home to her loving God on Friday, November 23, 2012.

Sister Leona is survived by her sister-in-law, Jean Fitzgerald and many nieces and nephews who shared their happy memories of her during the Vigil Service. The Mass of Christian Burial, held in the Chapel of Mary Mother of Compassion, Providence Motherhouse, Kingston on November 27, 2012, was presided over by Friar Ed Debono, O.F.M. Conv. Friar Ed also delivered the homily.