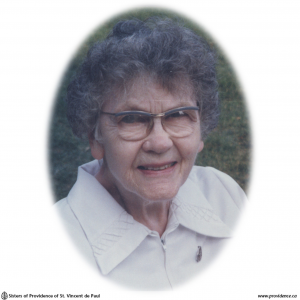 Loretta Buchanan was born on February 8, 1906, in Toledo, ON, the daughter of Malcolm James Buchanan and Elizabeth Maloney. Loretta was the youngest child in a family of six. When she was still quite young her family moved to Strome, eight miles west of Daysland, Alberta. It was here that she met the Sisters of Providence who worked in the hospital. In particular, Loretta came to love and admire Sister Camillus, whom she described as a gentle, beautiful Sister. At this time she thought she would like to look after the elderly when she grew up. When Loretta was thirteen she read a book about St. Francis Xavier and thought it would be wonderful to go to a place like India to tell the people about the love of God. That was the beginning of her vocation.

When Loretta was attending high school in Edmonton she met Mother Clement, the General Superior who was making a visitation at Rosary Hall. About a year later, when Loretta was only fifteen she announced that she wanted to enter the convent. Some of her family members were happy for her but her mother walked over to the rectory and said to the priest, “What am I going to do with that wild daughter of mine? She wants to enter the convent away in the East.” The priest advised Mrs. Buchanan not to interfere with a vocation from God, and so on July 6, 1921 Loretta arrived in Kingston by train accompanied by Sister M. Camillus.

While Loretta was in the Novitiate her mother died of cancer. She was asked if she wanted to go home but that would have meant remaining in the Novitiate for a longer period, so she did not return to the West at that time. When it was time for Loretta to make her final vows she was not yet twenty-one so Archbishop Spratt made her wait an extra year before making her final profession.

Sister was hoping to study to become a nurse but she was sent to study at Glen Nevis for two years and then she was sent to Normal School. To her surprise Sister Loretta, who took the name of Domitilla when she pronounced her vows, loved Normal School. She decided that teaching might not be so bad after all. Sister Domitilla began her teaching ministry in Trenton. At first her pupils were a bit intimidated by Sister’s presence, as she was very tall, but they quickly learned that every inch was full of humour and love. The parents of her pupils often came to her for advice and encouragement. In 1965 she was awarded the Red Cross Service Medal. She was active in the Red Cross for many years both as a child and as a teacher. For a few years she headed the local branch of the Catholic Teachers’ Federation in Belleville and Picton. While in Trenton she helped young people with public speaking and recalled that her students were beaten only once in seven years.

After teaching all the grades in several separate schools, Sister retired to Heathfield where she engaged in chapel work for some time. She suffered form diabetes and had a heart condition, but still remained interested and involved in life, both within the Motherhouse and in the larger community. For many hears she was very active in the pro-life movement. Until her sight failed, she took great pleasure in solving the daily crossword puzzle. In spite of her infirmities Sister Loretta never lost her great love of life and her sense of humor.

Sister Loretta died a peaceful death on Marian II on August 1st, 1996. Her Sisters were gathered in prayer around her bedside. Although all of Sister’s immediate family preceded her in death, there were many visitors at her wake and the chapel was full at her funeral liturgy the next morning. Mr. Jack Baker, who was taught by Sister Loretta over sixty years ago, recalled what a great teacher she was and how he still remembered the poetry she made him learn so long ago. Several Sisters and friends who were at the evening vigil spoke of Sister’s spiritual life, her patience in suffering, her great devotion to the Eucharist, her love of God’s creation, her encouragement of others, her freedom and love of live. Rev. Msgr. T. J. Raby, accompanied by several priests, presided at the Mass of Christian Burial on August 3rd. He remarked how impressed he had been to hear so many stories about Sister at her wake. They made him wish he had known her better. He said that we could all learn from, and give thanks for, the gift of her long and fruitful life.