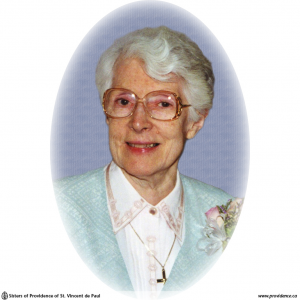 Loretto Boland was born in Toronto on June 5, 1917, the second of seven children of Josephine Bulger and George Boland. She attended St. Helen’s Elementary School where she was taught by the Loretto Sisters and then Loretto High School on Brunswick Avenue for two years until her family moved to North Toronto at which time she attended Loretto Abbey. During her fourth year of high school she was a boarder at the Abbey. On December 20th of that year her father died. After graduating from Grade 12, she took a one-year business course and worked as a stenographer for about two years. It was during this time that she felt called to religious life. A friend of her mother, who was a sister of Sister Mary Cecile Koster, recommended the Sisters of Providence to Loretto. Eventually Loretto entered on September 7, 1940. After two years of novitiate, she went to Glen Nevis to take Grade 13. Her studies were interrupted for four months to take Sister Mary Ignatius’ class at Sacred Heart School in King. She enjoyed her first attempt at teaching.

During 1944 – 45 she attended Toronto Normal School and found the work challenging and interesting. Her teaching career covered 34 years during which she taught grades 1 to 3 at Sacred Heart School in King, Grade 4 at St. John’s and St. Joseph’s in Kingston, Grades 3 and 4 at St. Peter’s School in Trenton, Grade 4 at St. John’s, Kingston, Grades 4 and 5 at Holy Family School, Kingston. In 1957 she moved to Smiths Fall and taught Grades 4 and 5 at St. Francis School and in 1961 she moved to St. James School as principal and teacher of Grades 6, 7 and 8. In 1969 she went to Belleville as principal and teacher of Grades 5 and 6 at St. Michael’s Junior School. In 1970 she moved into the secondary level teaching Commercial subjects in Grades 9 to 11 at Nicholson Catholic College. In 1972 she moved to the Motherhouse to do some secretarial work and to assist with the switchboard. She also took some oil painting lessons and was involved in a Bible study group with prisoners. In 1975 she returned to Belleville as a part-time librarian at Georges Vanier Catholic Elementary School. During her teaching years she taught catechism during the summers at Schomberg, Kemptville, South Mountain, Bedford and Sharbot Lake.

In 1982 she retired from teaching and had a sabbatical year at Gonzaga University, Spokane, Washington taking the CREDO program. In 1983 she returned to the Motherhouse as an assistant to the General Secretary and helped with archives until 1989. From 1990 – 93 she was a Volunteer Pastoral Visitor at Hotel Dieu Hospital in Kingston. She resided at the Alfred Street residence from 1984 – 92. She then returned to the Motherhouse where she remained until she was called home to her loving God on Tuesday, February 24, 2015.

Sister loved oil painting and produced some fine works. She also did lovely calligraphy. She loved to recite poetry which she had learned during allocution lessons as a child.

The Mass of Christian Burial, held in the Chapel of Mary, Mother of Compassion, Providence Motherhouse on Friday, February 27, was presided over by Most Rev. Brendan O’Brien, Archbishop of Kingston, accompanied by other members of the clergy. Rev. Robert Masters delivered the homily.