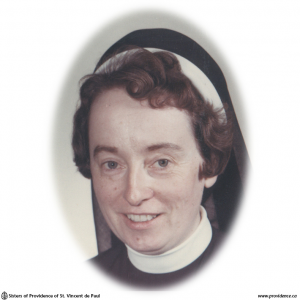 Theresa Veronica Chapelle was born in Belleville, Ontario, on September 5, 1927. Her mother, Julia Mullin, died just as Veronica was completing high school. Her pious and devoted father, John, was, during this trial, and all his life, a strong Christian model for his family of five girls and one boy. The fine upbringing which he gave them, no doubt built in Veronica the qualities she needed to endure the lengthy illness which preceded her death.

Having received her elementary and high school education at St. Michael’s in Belleville, where contact with many Sisters of Providence nurtured the seed of vocation, Veronica entered the Community on August 15, 1946. At her profession in 1948, she took the name of Sr. M. Lorraine. When the Sisters were later given a choice of using their family name, she chose to be called Sr. Lorraine Chapelle.

On completion of her training at Toronto Teacher’s College in 1950, Sister began teaching in Kingston. Later she taught in St. Malachy’s in Montreal, in Brantford and in Arnprior. Her service covered, at one time or another, every Grade from one to twelve.

Through summer courses and night courses Sister continually improved her qualifications, obtaining her B.A. (Eng., His., Geo.) from Ottawa University in 1963, doing post graduate work in Geography, qualifying for the Supervisory Officer’s Certificate for Ontario schools in 1972, and Primary Supervisor’s Certificate in 1975. Still she found time to take her term as President of the Principal’s Association of Renfrew County Separate Schools and to be 1st Vice President for a year of Arnprior C.W.L.

As principal of St. Joseph’s School in Arnprior for eleven years, she had as her overriding aim “to equip children with the tools that are necessary to live in a Christian, democratic society, and to instill ideals which are acceptable to the great love and respect in the children for herself as a warm, friendly person, and for religious life as commitment to God.

At the time of her death, Sister Lorraine was, also, Superior of the Sacred Heart Convent in Arnprior. The Sisters remarked in her a deep faith, great devotion to the rosary, a tremendous amount of courage and a sense of humour.

During the 1970’s, Sister Lorraine suffered from several minor ailments and in March 1977, was diagnosed as having myelofibrosis – an affliction in which there is a replacement of bone marrow by fibrous tissue. During the next fourteen months, specialists were unable to check the progress of the disease. Blood transfusions were frequently necessary and in the last few months Sister needed continual care either in Ottawa Civic Hospital or in Arnprior and District Memorial Hospital. Her father, brother and sisters visited her as often as possible. The members of the Community who, also, called often remarked how appreciative she was of each visit and how she kept up her hope of recovery. The Community prayed from July, 1977, until her death to Mother Gamelin that, God willing, she would be cured. However, the Lord preferred to take her to her well-earned reward on May 6, 1978. She died in Arnprior Hospital.

Sister Lorraine was waked in the Arnprior Convent on May 7th. At 11 a.m. on May 8th, in St. John Chrysostom Church, Arnprior, a special Mass of tribute was concelebrated by ten priests, with Bishop Windle, of Pembroke Diocese, in the sanctuary. The principals of the schools were honorary pall bearers, the active pall bearers were six men teachers from St. Joseph’s School. C.W.L. members were present in a body. The readers were Frank Turner, Superintendent of Schools, RCRCSSB, and Dennis Nolan, his assistant. The main celebrant was Rev. Murray Tardiff, parish priest, and the homily was delivered by Monsignor R.E. Dillon. Sr. M. Carmel Teresa and Sr. Patricia Ann Ryan went up from Heathfield to act as organist and soloist respectively.

After this Mass, the remains were brought to Heathfield, where, for the first time, the wake was held in the auditorium. This setting provided ample space for the many relatives and friends who called, as well as the Sisters.

The funeral Mass at 10:00 a.m., May 9th, was attended by all Sister Lorraine’s immediate family. There were seven priests to concelebrate with Archbishop J.L. Wilhelm and seven others attended in the congregation. The honorary pall bearers were Sister Isobel Oatway, Sister Mary Fitzpatrick, Sr. Una Byrne, all from the convent in Arnprior, Sr. Mary Mona, from Montreal, and five classmates – Sr. Monica Gannon, Sr. Rose Mary Ryan, Sr. Rose Anne Ryan, Sr. M. Marguerite O’Neill, Sr. Rose Marie Scanlan, and Sr. Inez Donovan, General Councillor. Four nephews were the active pall bearers. The homily was given by Fr. John Affleck, of Arnprior. Father paid tribute to Sister’s faithfulness to the Lord’s work in her and her sensitivity to the Gospel. She was aware her pain and sorrow could help fill up the suffering of Christ.

During a visit just before her death, Sister had remarked to Fr. Affleck, “I want to go and be with the loving Lord. Sometimes, however, there is a little fear. Pray the Lord to take the little fear away.” We are sure that the cheerful courage and faith so noticeable in her life will take her speedily to that place where fear will be no more.