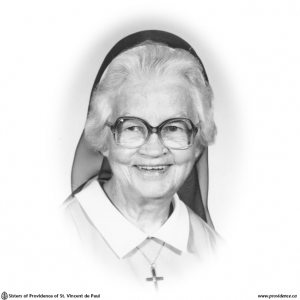 Sister Margaret Black, formerly Sister Mary Imelda, in her 91st year, died at Providence Motherhouse, Kingston, on May 8, 1999. She was survived by her brother, James of Belleville.

Margaret, one of a family of seven children, was born in Belleville on March 30, 1908. Her father by a previous marriage had a son, Murray, before he married Margaret’s mother, Margaret Fitzpatrick. This second marriage was blessed with four more boys and two girls. For most of her childhood Margaret accompanied her father to daily Mass at St. Michael’s Church in Belleville. She took music lessons from the Sisters at the nearby convent. Those who taught her remarked that Margaret was an excellent student. Margaret was also blessed with artistic talent. Her family still treasures the china she hand painted before entering the convent.

After leaving Catholic elementary school Margaret often went back to visit the Sisters who had taught her. She remembered that Sister Mary Philip always received her graciously and amused her with her keen sense of humor. Sister Mary Hilda continued to keep in touch with Margaret and her letters impressed Margaret greatly.

Her best friend, Margaret Truasch, later known as Sister Mary Amable, like Margaret, was attracted to religious life. They entered together on September 15, 1925 the feast of our Mother of Seven Dolors. Margaret remembered her Novitiate as a happy time in her life. After her profession in August 1927, Margaret (Imelda) was sent to Normal School in Ottawa. Her first teaching mission was at Lancaster. She wasn’t much older than her students. Margaret went on to obtain a degree at Queen’s University. Other places which benefited from Margaret’s teaching skills were Prescott, Newmarket, Glen Nevis, Perth, King, Trenton, Montreal and Brantford. During her long teaching career she was often the principal in the school or superior in the mission in which she taught.

At Perth Margaret started the high school with a class of over forty grade nine students. That year she became ill and was diagnosed with Hodgkin’s disease. She was the first patient treated with radiation in St. Mary’s Hospital, Montreal. For the first treatment she brought her holy water bottle and blessed the room. She was out of school for the rest of the year but she made a full recovery during that time. In 1957 Sister Margaret had the pleasure of welcoming her niece, Mary Elizabeth Cunningham, who later became Sister Mary Fidelis, into the Providence Community.

In 1961 Sister went to Nicholson College in Belleville where she taught for four years. At this time Margaret was the superior at Providence Hall which was almost directly across the street from Margaret’s home on Alexander Street. She found many ways of being helpful to her parents. For several years Margaret spent her holidays with Sister Teresa Cole at a family cottage near Timmins. Sister Teresa said that Margaret was a great favorite with the whole Cole family. Sr. Teresa treasured Margaret’s friendship, but she also looked upon this friend as a real model of religious life. On Holy Thursday night while Margaret and Sister Teresa were going to Mass, Margaret was struck by a car and badly injured.  After recovering from this accident Margaret was named principal of St. Malachy’s School in Montreal where she remained until her retirement at the age of sixty-five.

After retiring from teaching, Margaret served as coordinator in Brantford, Providence Motherhouse and Trenton. While in Trenton Margaret acting on a conversation with Sister Irene MacDonell, a visiting sister from Peru, inspired the members of a parish prayer group to which she belonged to pray for the missions in Peru and to financially support poor students there. Years after Margaret left Trenton those good friends continued to carry on this important work for the missions. In addition, Sister Margaret wrote many letters in support of social justice issues. She was heard to say that people considered her to be very conservative in her views but this was not really the case as far as her world view was concerned.

In 1982 Margaret made a thirty-day retreat at Pickering. Her retreat director told Sister that she had a beautiful simple spirituality. When offered a sabbatical, Margaret chose to study theology at Regis College in Toronto. After her graduation Margaret served as coordinator at Trenton. In 1987 Margaret was called to Kingston and asked to fill in for Sister Margaret Killeen who was ill. This assignment as Pastoral Visitor to patients in Kingston General Hospital lasted for five years. Heart problems forced Margaret to give up this work in 1992. In spite of her failing health Margaret spent hours visiting the other sisters in the Motherhouse Infirmary and she spent long grateful hours in prayer. Sister will be missed by all who knew her especially by her dear friend and companion in her final years at the Motherhouse, Sister Marian Farnand.

Sister’s Mass of Christian Burial was celebrated on Tuesday, May 11, 1999 by Rev. Msgr. T.J. Raby, assisted by Rev. J.R. Rozon. In his homily Monsignor Raby spoke of the beautiful way in which Sister Margaret responded wholeheartedly to God’s love for her, and of how she reflected this love to others in a daily dying to self. She was indeed one of God’s precious, faithful Woman of Providence.